U.S. Government Sues, Wins On Behalf of Christian Employee Who Refused Hand Scans Because of the Devil January 28, 2015 Terry Firma

U.S. Government Sues, Wins On Behalf of Christian Employee Who Refused Hand Scans Because of the Devil

Let’s say you run a business that, like thousands of others, tracks employees’ attendance and work hours. In the old days, you’d use cards and a clock-based machine that stamps workers’ sheets with the date and time of their arrival and departure. To make matters more efficient and bring the whole shebang into the digital age, and to discourage fraud — like workers “buddy-punching” each other’s time cards to illegally inflate hours — you then upgrade to a biometric scanner. Maybe this one (I may or may not have altered the image). 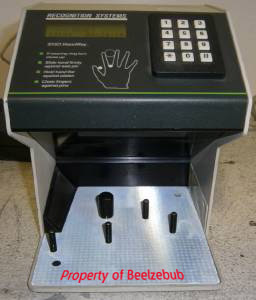 After the changeover, there’s a small problem: One worker refuses to use the scanner. You sit him down and ask what gives. He explains that his non-negotiable objection is of a religious nature: the scanner, he believes, will secretly imprint him with the mark of the Beast.

Hiding your exasperation, you assure him that no such thing will occur, and you eventually show him documentation by the scanner’s manufacturer that says that the device does not and could not make a mark of any discernable kind on a physical object, including a hand. The employee, who believes he has the Book of Revelation backing him up, disregards all non-Biblical explanations, and reiterates that there’s no way he’ll risk his immortal soul by placing his hand in the scanner.

Are you, as his boss, justified in firing him?

That question was the at the heart of a two-year tug of war between Consol Energy Inc., a natural-gas and coal company out of Philadelphia, and Beverly Butcher Jr., a Consol employee and fundamentalist Christian who worked at a company mine in West Virginia. At some point, the U.S. government got involved: the federal Equal Employment Opportunity Commission filed a lawsuit against Consol on Butcher’s behalf.

And now we have a jury verdict: Consol has to pay Butcher $150,000 for violating his religious rights. (And that’s just punitive damages; Butcher may also be entitled to a yet-to-be-determined amount of back pay.)

After a two-year legal battle filled with Bible quotes and meditations on the Antichrist, Consol Energy Inc. was found to have wronged a 30-year employee by not accommodating his objections over a hand scanner. …

This isn’t the first time the subject has come up, since the manufacturer’s letter [addressing the “mark of the Beast” fears] dates back to 1998. The letter suggests that those still not relieved by the company’s assurance can opt to place their left hand with the palm up in the scanner, explaining that, “The Scriptures, regardless of version, consistently refer to the ‘mark of the Beast’ being found or placed only on the RIGHT hand or forehead.” Mr. Butcher did not consider that an option.

In later court testimony, he explained that anything having to do with the hands — either hand — would put him in danger and, as an Evangelical Christian who believes that everything in the Bible is literally true, he could not use the machine.

When Consol declined to count his attendance in any other way, Mr. Butcher retired under protest at the age of 58. He planned to work another five years, he later said in court documents.

Complicating matters is the fact that Consol accommodated other employees who had (non-imaginary) trouble with the hand scanner:

After his retirement, Mr. Butcher learned that two other employees, who were missing fingers and could not use the scanner properly, were given the option of punching in their employee numbers on a keypad on the scanning fixture. That’s when a failed union grievance process led to the federal Equal Employment Opportunity Commission getting involved and filing a lawsuit against Consol on Mr. Butcher’s behalf. …

As the EEOC wrote in a court document … “The relevant issue is whether Butcher had a religious objection to hand scanning, not why he objects.”

The Commission’s lawyers argued successfully that as long as Butcher harbored “sincerely held beliefs” (the level of kookiness clearly not being a factor), Consol was obligated to reasonably accommodate them.

Slacktivist’s Fred Clark believes that the jury verdict was just, and he has a strong point:

At many different jobs, I’ve checked in and out using old-fashioned punch-card time clocks, digital time clocks, written time sheets, and informal nods to the boss. I’ve never used a hand scanner. Most people haven’t. Most companies haven’t. So allowing Butcher to clock in using any of those other methods surely wouldn’t have been an “undue hardship” for the company. That’s why the EEOC won this case for Butcher, and why Consol Energy lost. …

Protecting religious liberty means protecting the right to believe in the implausible, the idiosyncratic, the offensive, the stupid, the factually insupportable, the demonstrably false. Otherwise we’d wind up putting the state in the position of adjudicating between legitimate and illegitimate religious beliefs.

Suppose there were another employee who also objected to the hand-scanner, but objected on the grounds of it being a dehumanizing power grab. Further suppose that employee was an atheist. Would that employee win a similar suit?

So now we have two folks with an objection: one bogus, one plausible. The bogus one is afforded legal privileges denied the other, because he dropped the R-bomb [religion] in his deposition. Would anyone like to take a crack at explaining how this isn’t a violation of both the Establishment Clause and the Equal Protection Clause?

In the case of Butcher, I’ll concede with some tentativeness that the jurors decided correctly, but I also consider it plausible that they did so on the wrong grounds. For the average citizen, the case is not easy to tease apart by using strictly constitutional arguments. Some form of proletarian antipathy against a big bad business like Consol may have played a (minor?) role; more likely, the social incentive to side with a fellow God-believer is surely plenty alluring.

It doesn’t matter for Consol, which is going to have to pay through the nose for not accommodating Butcher’s patently risible beliefs.

January 28, 2015 Sick! Sick! Sick!
Browse Our Archives
What Are Your Thoughts?leave a comment