For as much shit as Bill Maher gets (and deserves) for his questioning of the efficacy of certain vaccines, at least he brings on qualified guests who try to set him straight.

I wish Larry Wilmore had done more of that on last night’s episode of The Nightly Show. 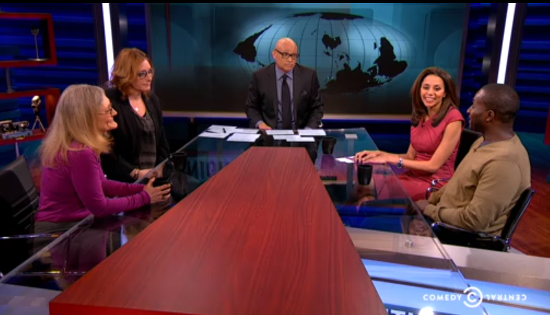 Even though Wilmore began strongly with a wonderful segment all about how vaccine misinformation is spread — referencing the discredited Andrew Wakefield and bullshit-peddler Jenny McCarthy — his panel discussion left a lot to be desired.

The panel included an anti-vaxxer (just to have that voice at the table), a staffer on his show (who didn’t seem to understand the issue very well), a comedian (who was pro-vaccine, but certainly no expert), and a medical correspondent (who should have been the voice of reason but wasn’t).

Just to get this out of the way, I understand why Wilmore invited an anti-vaxxer to the table and don’t have a problem with it. If you’re going to talk about why so many people believe all the misinformation out there, it helps to have someone holding that perspective at the table, if for no other reason than to make sure the pro-science side isn’t creating a straw man. The discussion could’ve happened without her, but I don’t think it would have been as effective.

That said, there were almost no attempts by Wilmore or the panelists to really set her straight or challenge her talking points. Even though Wilmore made it clear that vaccines are reliable and safe in the first part of the show — which was hilarious and you should watch it — he didn’t invite anyone who could carry that message through the second half. Maybe you can blame some of that on the producers or the other guests. Maybe they hoped the medical expert would more aggressively debunk the lies, which she didn’t (at least in the edited version we saw on air). Maybe the roster of guests is still a work in progress and they haven’t figured out how to politely disagree with each other. But it could have been avoided so easily… Instead, gullible viewers may have come away with even more silly reasons not to vaccinate their children.

In a show that was supposed to advocate for vaccines (rather than simply understand where the anti-vaxxer was coming from), it didn’t deliver on its mission. When you have a show that aims to educate viewers on important issues, you can’t leave this sort of thing to chance. John Oliver seems to have figured out how to do that on his show. I hope Wilmore learns how to do it soon.

January 28, 2015 James Randi Announces His Retirement
Browse Our Archives
What Are Your Thoughts?leave a comment