It’s amazing how, after all the church/state separation cases we’ve seen in public schools, there are still teachers who would put up a sign like this in an elementary school classroom and not think it’d be a big deal: 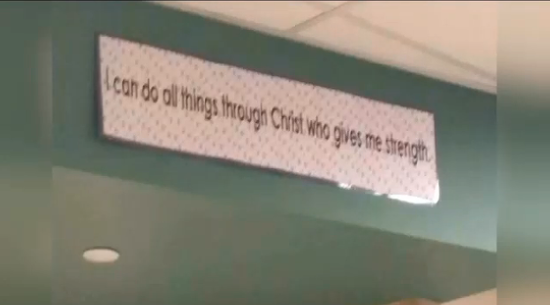 I can do all things with Christ who gives me strength.

(Okay, maybe it’s not that surprising…)

Dustin Mathenia, whose daughter attends Becker Elementary School in Waterloo, Iowa, wasn’t happy that his daughter had to see that sign every day:

“This isn’t a Christian school. This isn’t privately funded. Your tax dollars, mine, all of us. We all pay for this. It comes from a conglomerate of incomes.”

“The focus of school should not be religion,” he says. “It should be learning, and expanding the mind. Not the spirit.”

He’s right, of course. So the district immediately took it down, right?

Not so fast. Officials didn’t even see it as a problem:

“This is the world we live in,” says the district’s Director of Relations Tara Thomas.”It would be nearly impossible to reject every point of view or counterpoint in a tunnel vision approach to one’s educational experience or life growth.”

“Any individual employee does not check their faith at the door, nor does he or she check their ability to have freedom of expression in terms of what they may utilize to invoke and inspire them in regards to their work,” says Thomas.

That’s bullshit, and I suspect Thomas would have said something very different if a different teacher posted verses from the Koran in her classroom. It’s stunning, isn’t it, how people this ignorant of the law find their way into positions of power?

The sign was eventually taken down, presumably after KWWL reporter Olivia Mancino began digging into the story, but it shouldn’t have taken that sort of pressure.

Oh. One other thing. That parent, Dustin Mathenia?

Though, if you read the comments at the news site, you’ll find plenty of other Christians invoking the No True Scotsman fallacy against a man who shares their faith.