The Young Turks Take on Harlem Hate Pastor in Interview

You all know Harlem Pastor James David Manning because of the inflammatory things he’s said about President Obama, gay-rights supporters, and Starbucks (which he said flavored their coffee with the “semen of sodomites”).

That’s why I was surprised to see he did an interview with Ana Kasparian and Cenk Uygur of The Young Turks: 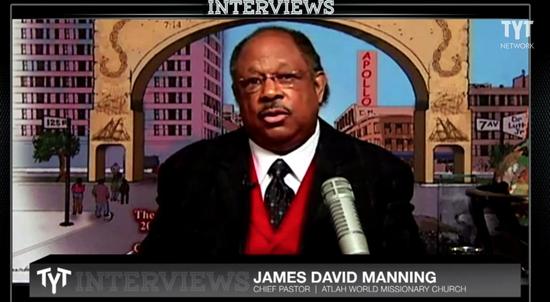 My favorite part was this question from Uygur:

Pastor Manning, you said that Starbucks was putting semen of the sodomites in their coffee, but here’s the interesting part: “It flavors up the coffee and it makes you think you’re having a good time.” Which then makes me wonder: Do you equate drinking semen with a good time?

Manning’s answer is priceless, too 🙂

In all seriousness, I think it’s a good idea to interview people like Manning. Some people would prefer ignoring those like him and Pastor Steven Anderson and leaders of the Westboro Baptist Church. But I like getting them on the record, on someone else’s terms. I like that they’re getting challenging questions, even if they give roundabout answers, and sometimes, they’re actually humanized when seen outside of the context of short sermon clips. That’s not a bad thing, either, because it suggests they can break from their hateful ways.

Kudos to TYT for inviting him on the show.

January 27, 2015
In Egypt, Atheists Are Considered "Threats to National Security" or "Carriers of a Dangerously Contagious Virus"
Next Post