Mike Huckabee, the man who wants to become President to protect us from an atheistic theocracy, has a solution to violence in this country, particularly in our schools.

You’ll never figure it out.

Speaking at a conference arranged by televangelist Morris Cerullo, Huckabee recounted how, when he was a youngster, his public school was full of religion: 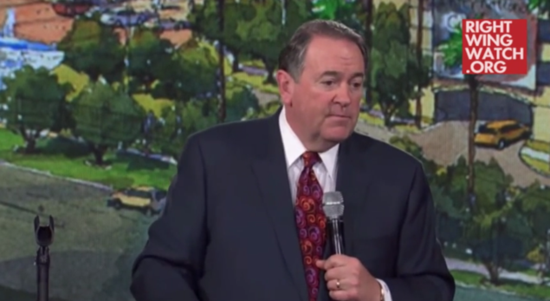 … And they would talk to us about Jesus. The Gideons would give us Bibles. And nobody got arrested. Nobody got sued. And by the way, nobody got hurt either. Because we were bringing Bibles to school, people weren’t bringing guns to school, except for the deer hunters who left them in their trucks. We prayed at my school. We prayed the first thing every day…

Huckabee’s absurd suggestion that people are getting arrested for praying in schools is the most reasonable part of this statement. It really is that bad. For starters, he’s wrong about school violence being new; we’ve had instances of mass school killings on our shores since 1764 (although those victims were clubbed rather than shot).

But if the Bible, or belief in it, really had the power he attributes to it — the ability to eradicate school violence — consider what kind of world we’d live in. Things like the Catholic Church’s “pedophilia scandal” simply wouldn’t have happened. If belief could stop school shootings, surely there wouldn’t be church shootings. Religious people could never have justified slavery, much less using Bible verses. Our prisons wouldn’t be overrun with religious people.

And yet, oddly enough, the wholesome properties of Bible belief that allegedly staved off school violence during Huckabee’s childhood somehow fall short in all of those cases — even when it comes to protecting children in a house of God from the predatory behavior of men in God’s service.

This is a self-congratulatory non-solution to the problem of school violence. Inundating children in religion will not, and never has, stopped bad things from happening. It is flattering to assume that a divine being has shared with you the One True Way. It is politically useful to suggest that you must force that One True Way on everyone else — for their own sakes, of course! But it does nothing to solve the actual problem — indeed, it worsens matters by distracting from real solutions, while throwing additional problems into the mix.

This self-assured religious hubris is no argument for disregarding church/state separation. On the contrary, Huckabee seems to make a strong case for the importance of that Wall every time he gives a speech.