The American Family Association’s Bryan Fischer has made a career of saying horrible, offensive, and insane things, but this time he’s gone too far.

It’s by no means unusual for him to express contempt for atheists and our rights (Fischer has postulated everything from taxes on “atheists who don’t go to church” to barring atheists from the military), nor is it unusual for him to link people and groups to Satan and demons (from the Yazidis to Muslims to LGBT activists).

You might think there are no lines left for Fischer to cross, but during Monday’s broadcast of his show, he found, and crossed, one: 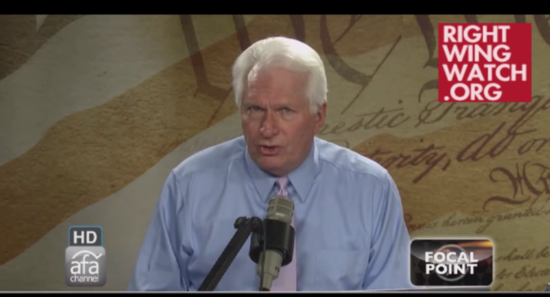 I, for one, am literally, virtually irate (which translates to something like annoyed) at the snub. How dare he overlook the “demonic energy” of the atheist community?

Now, I mean no offense to the LGBT community. They’ve worked hard to earn that title, what with having the audacity to ask for equal rights. But the fact is that we in the atheist community deserve it more.

For starters, there are gay Christians (who presumably, as an article of their faith, dislike God’s eternal enemy). Now, I know Fischer doesn’t think they’re true Christians — but, if we’re honest, Fischer’s criteria for “true Christian” is pretty narrow. Other than him, and maybe the half a dozen other equally hateful bigots out there, I’m not sure anyone makes the cut. Atheists, on the other hand, don’t even believe in Christian mythology. At best, we’re as neutral about Satan as we are about Voldemort, which ought to upset Fischer even more. (Also, most atheists are arguably more “Christ-like” than those who adhere to Fischer’s brand of faith.)

But, as Truly True Believers™ know, if you don’t believe in God, you must believe in his fictional nemesis. And you must worship him, too. It’s like being on Team Jacob or Team Edward during the height of Twilight fandom (only the choices are arguably less offensive) — you must worship one and loathe the other. There is no other option. It’s only logical.

So, with all due respect to the LGBT community, I think it’s clear that Fischer is shortchanging us. And I, for one, am deeply offended. For shame, Mr. Fischer. For shame.

January 27, 2015
At a Recent "Psychic" Demonstration by John Edward, Skeptics Were Waiting with Educational Signs
Next Post

January 27, 2015 To Fight Extremism, Should Muslims in French Prisons Receive More State-Sponsored Religious Services?
Browse Our Archives
What Are Your Thoughts?leave a comment