Greece, the country, is now led by an atheist.

NPR contributor Joanna Kakissis, reporting from Athens, says that what’s unusual about Alexis Tsipras, who was sworn in as Greece’s prime minister yesterday, isn’t necessarily his young age or the fact that he doesn’t like to wear ties.

As scores of news photographers clicked away, Alexis Tsipras took his oath of office … He said he promised to uphold the Constitution and look out for the welfare of Greeks. Tsipras is an atheist, so he refused a religious oath — the custom in this Greek Orthodox country. He’s the first prime minister to do so. He’s only 40, so he’s also the youngest leader in Greece since 1865. 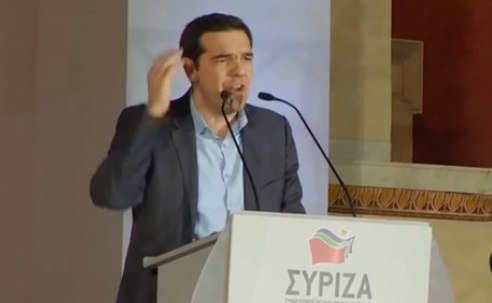 His first act as premier was to lay flowers at a monument to resistance fighters who battled the Nazis in World War II. Tsipras has said he wants to seek repayment of a wartime loan that Greece was forced to give the Nazis.

And Tsipras has already found a second way to get on German Chancellor Angela Merkel‘s bad side. His government says its socio-economic priority is to renegotiate the German-led EU bailouts that have imposed severe austerity on the Greeks for the last few years, a source of deep popular discontent. Unemployment in Greece has soared to 28 percent, and many of those those who’ve managed to keep their jobs have been hurt by drastic pay cuts.

To forge a majority in the Greek parliament, Tsipras brokered an alliance between his own left-wing Syriza party and the right-wing Independent Greeks, an unlikely feat given that the two groups agree on the austerity-measures issue but not much else.

The leader of Independent Greeks, Panos Kammenos, got himself in hot water last month when he asserted that Jewish Greeks receive better treatment from the government than non-Jews, and that they pay less in taxes.

According to the U.K. Telegraph,

His claims were dismissed by a Greek government official as “conspiracy theories, lies and slander” drawn from “the dark side of the internet.” The Board of Jewish Communities in Greece called his words a “serious anti-Semitic act.”

January 27, 2015
Remember: There Are People Who Vote and Breed and Believe in Bob Larson's Exorcisms
Next Post