Governor Bobby Jindal Talks About the Need for a “Spiritual Revival” in Our Nation January 25, 2015 Hemant Mehta

Yesterday, Louisiana Governor Bobby Jindal held a prayer rally at LSU that gives you a perfect glimpse of what his future presidential campaign would look like — and why he’s better suited to run a church than a state.

Just look at what Jindal suggested could fix our nation’s problems: 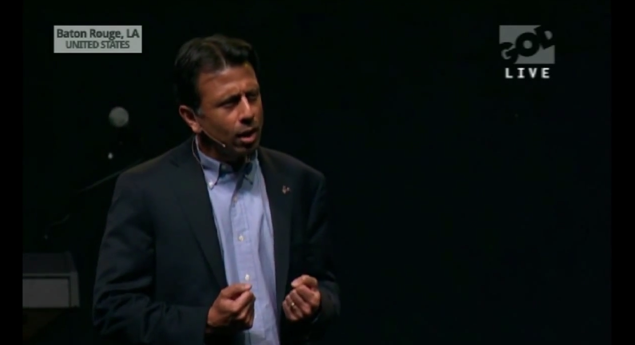 … We can’t just elect a candidate and fix what ails our country. We can’t just pass a law and fix what ails our country. We need a spiritual revival to fix what ails our country.… We are a united people. We are God’s children. We are precious because we are made in His image. God has created us with a God-shaped void in our hearts and we… frustrate Him by filling it with things and material goods and substances. Now it is time for us on bended knee to turn back to God in humble prayer, to repent and ask for His blessing because He is a faithful God. He desires our prayers. I believe in the power of prayer and I pray that we will see a spark lighted here. We will see fifty responses in every state in these United States and we will see a spiritual revival ignite across these United States of America.

That God sure is needy…

But back to those initial comments — why the hell is Jindal a governor, and setting the stage to run for President, if he doesn’t think laws and candidates can help fix a nation? If prayers have that much of an effect, he should step down from office and run a ministry.

Anyway, a politician invoking God in a political rally is nothing new. What made this event particularly noteworthy was the partnership with the AFA (a group that is notoriously anti-gay rights) and the list of other cringe-worthy speakers, as Rachel Maddow noted:

At least there were student activists protesting his appearance:

LSU Student Sabrina Valenti believes that “it just seems unjust for people to hide behind their god and their religion as an excuse to hate their brothers and sisters whose sexuality is just different from their own.”

Hundreds of students, teachers, and community members gathered today to stand up for their beliefs.

“To actually call attention to the record of words of the AFA and also the hypocrisy of a governor who has cut hundreds of millions of dollars from state higher education and is holding an event like this on a university campus both projecting the kind of hateful rhetoric they project but also to, as I think we all know, launch a presidential campaign” says Bryan McCann, an LSU communication professor.

Since conservatives will call this an attack on their religious freedom, let’s make this clear: Jindal’s Christianity isn’t the problem here. It’s that he wants to impose his religious beliefs on everyone else. At best, his event was just pandering to a base that already gets pandered to every damn day. At worst, we have an elected official who admits he’s pretty useless in that position because God will just take care of everything… if only those damned liberals who respect the First Amendment would just get out of the way.

January 25, 2015
Why Should Gandhi Have To "Sweat His Balls Off" In Yoga Class?
Next Post