You may have heard that Republicans were aiming to vote for a 20-week abortion ban on the anniversary of the Roe v. Wade ruling. Some Republican Congresswomen took issue with the bill, particularly with the limited rape exception. The political repercussions, they feared, would be damaging to the party. Congressional leadership abandoned plans for the vote, and focused instead on H.R. 7, which

That bill passed. Some pro-life and conservative voices are not at all happy, however, that the 20-week abortion ban was shelved. Their ire (and vitriol) has come to focus on the Republican congresswomen who voiced concerns with the bill. One of those targets is North Carolina congresswoman Renee Ellmers (below). Which is strange since, as Joan Walsh at Salon notes, Ellmers is hardly the archetype of a woman’s rights activist. 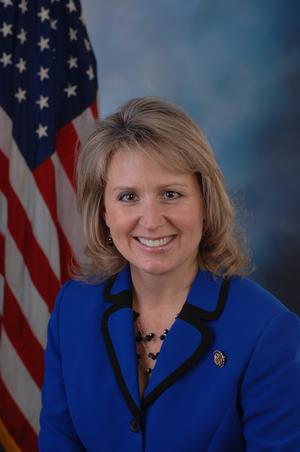 … Ellmers has been reliably right-wing and anti-women most of the time, leading the charge against the Affordable Care Act’s mandating that insurance policies cover pregnancy-related healthcare with the memorable war cry: “Has a man ever delivered a baby?” As I noted at the time, you might think that was the opening salvo in a defense of sharing the costs of childbearing, but no, it was a defense of protecting men, and essentially returning to the days when being a woman was a preexisting condition.

She also tried to help the GOP win over women by advising that when talking issues, they “bring it down to a woman’s level” by talking about real women’s lives — advice that was widely interpreted as condescending to real women.

Her conservative stances won Ellmers the support of Sarah Palin and other right-wing luminaries… until, that is, she expressed concern about the rape exception and took a principled stance against the bill on the grounds that it would likely alienate young voters. It was at that moment that Representative Ellmers went from a “Mama Grizzly” to, in the words of Fox News contributor and Red State writer Erick Erickson, “the GOP’s Abortion Barbie.”

This characterization was later reiterated by anti-abortion crusader Jill Stanek. Because, as many pro-life advocates will tell you, it’s all about respecting — truly respecting! — women. By taking away their rights and degrading those who dare to disagree.

But it was another Red State writer, Aaron Gardner, however, who went from the demeaning-chauvinistic ground that Erickson so happily occupied to a far more horrifying stance. In an article entitled “Is Renee Ellmers Worthy of Life?” he asks:

Is Rep. Renee Ellmers (R-NC) worthy of life? No, really, I see no reason why I shouldn’t expect an answer. Ellmers, and the others who conspired against a bill to restrict abortions after 20 weeks of pregnancy that had 60% public support, should come out and justify her existence. Tell me why you are worthy of this life you have been given, Representative.

While he notes that some will find the question “impolite” (there are a few more adjectives I could have come up with, but never mind), he’s not concerned. Worrying about winning “awards for congeniality” isn’t really his style, he claims. Nor, it seems, is disagreeing with someone without contemplating their death. But lest you think there’s something “impolite” in wondering if there’s any reason for your ideological opponents to exist, he’s keen to assure his readers that he’s completely justified in asking. And he really doesn’t care if you think so or not.

My indignation is righteous, as is my cause.

Gardner’s particular righteous indignation, he explains, comes from the fact that his mother was conceived in rape — and, had his grandmother taken the option of abortion, his mother and her children (including him) would not be around today. This isn’t an argument against abortion rights any more than it’s an argument that rape is God’s “broken” delivery system for “gifts,” as Rick Santorum once suggested. There are lots of factors that might have prevented Gardner’s existence (abortion is only one); his and his mother’s happy existence is not a valid argument for the legitimacy of the circumstances that resulted in his mother’s birth. A woman’s right to choose if and when she’ll be pregnant doesn’t end because a rape pregnancy where abortion was not an option resulted in a happy family.

As Gardner sees it, though, he is

… forced to justify not only my own existence, but the existence of my mother and brother, my niece and my own children. I have to positively affirm my life and the life of those around me for the simple fact that I am.

Of course, the pro-choice position is just that: allowing the pregnant person the choice to continue or terminate the pregnancy. It does not mean that she has to justify her own decision, much less the child resulting from that pregnancy.

But Gardner advocates a hardline stance where every fertilized egg is a person, and women’s rights rank lower in priority; to grant an exception based on the circumstances of that egg’s fertilization is murder. And, somehow, he is so-anti-murder that he feels it is perfectly acceptable to call into question another person’s right to exist if they don’t agree with him.

He tries very hard to make abortion all about him. But he fails. Abortion is about a woman’s right to control her own reproduction, particularly in the case of rape, where the first step in that process was forcibly removed from her control. Acknowledging that a woman has a right to abortion is no more an attack on Aaron Gardner than it is on me or anyone else.

But, at risk of myself being “impolite,” this all seems like a shabby pretext to suggest that anyone who disagrees with Gardner is not worthy of life. He may claim, in the context of abortion, that “it is all life we should be concerned with,” but when he says things like, “Ellmers and her fellow followers of Moloch” — referencing an ancient God who received child sacrifices — he is setting up an unmistakeable divide. He, his families, and fetuses conceived in rape are “worthy of life”… but Ellmers? Well, she’ll sacrifice them, and her “own justifications of worthiness may just fall flat.”

Gardner attempts to claim a moral high ground here, but the reality is far different and more disturbing. He is such a self-fashioned champion of life that finds it acceptable to call into question another person’s “right to life”… because she disagrees with him. This seems far less a stance from a true champion of life and more like the kind of extremism exhibited by those who believe they’re simply carrying out God’s work by bombing abortion clinics.

January 25, 2015 Hold On To Your Hat: Toupée-Like "Magic" Yarmulke Aims To Hoodwink Anti-Semites
Browse Our Archives
What Are Your Thoughts?leave a comment