Culbert Olson: the California Governor Who Wasn’t Afraid to Admit He Was an Atheist January 25, 2015 Hemant Mehta

Culbert Olson: the California Governor Who Wasn’t Afraid to Admit He Was an Atheist

At an event sponsored by the California State Library and California Archives this week, Debra Deanne Olson spoke about her grandfather and former California governor Culbert Olson.

Olson, who died in 1962, was notable for being that rare atheist in public office. Not only did he skip the “So help me God” part during his oath, he didn’t even swear in on the Bible. He affirmed his oath in 1939 with a hand in the air and the other in his pocket: 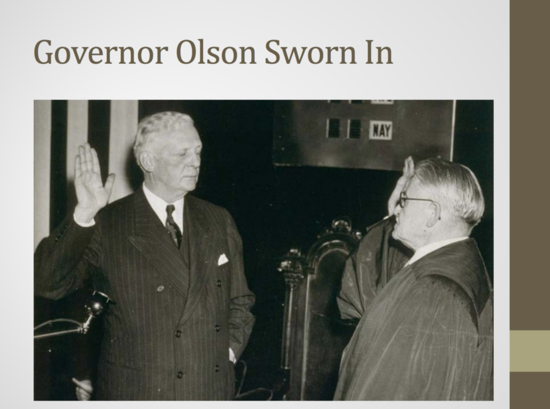 That’s because he was an atheist, and not just any sort. He was an open and defiant nonbeliever.

According to an article in an old issue of American Atheist magazine (which you can read here), Olson told the California Supreme Court justice who came to administer the oath that:

… there was no use to ask me to say “So help me God” because God couldn’t help me at all, and that there isn’t any such person, and I will have to just say “I will affirm.”

A few days later, though, he was told to take an oath on the Bible, perhaps just for political purposes. Even then, he did it with his fingers crossed: 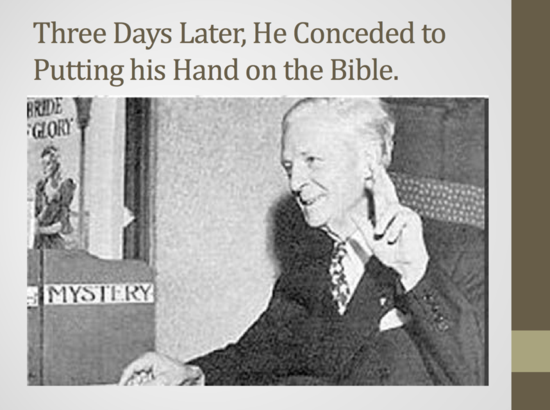 It’s refreshing to hear about an atheist politician who wasn’t afraid to admit it. I can’t speak for his policies and effectiveness, but given how many elected officials pander to a religious base, it’s good to know of one who just didn’t give a damn about any of that.

January 25, 2015
Mike Huckabee Mocks Climate Change: "A Beheading is a Far Greater Threat to an American Than a Sunburn"
Next Post