Pagan, Despite Not Being Asked to Give Invocation, Recites Prayer to Satan During School Board Meeting January 23, 2015 Hemant Mehta

Pagan, Despite Not Being Asked to Give Invocation, Recites Prayer to Satan During School Board Meeting

Last September, David Suhor (who calls himself an Agnostic Pagan Pantheist) delivered an invocation for the Escambia County Board of County Commissioners (in Florida) and it was Satan-tastic.

His main goal, though, has always been to deliver an invocation to the Escambia County School Board in Florida. They have a policy that allows for invocations, and Suhor wanted to give one. He was invited at one point but there was a conflict on the date, so it didn’t happen… so he persisted. But another invite never came. One board member, Jeff Bergosh, even said he wouldn’t let it happen because it would offend the audience, leading Suhor to say on this site:

… the longer I am delayed, the more obscure I’ll make my prayer when they finally allow it. Right now they are Pagan-level cooperation. More rejection and delays and I’ll go to FSM. If they keep obstructing, I go Satanic.

On Tuesday night, at a school board meeting, Suhor was not invited to deliver the invocation. That honor went to a local Jewish rabbi — invited by Bergosh for the sake of “diversity” (which, we can admit, is hardly the case).

According to one account, Suhor didn’t take the invocation very well: 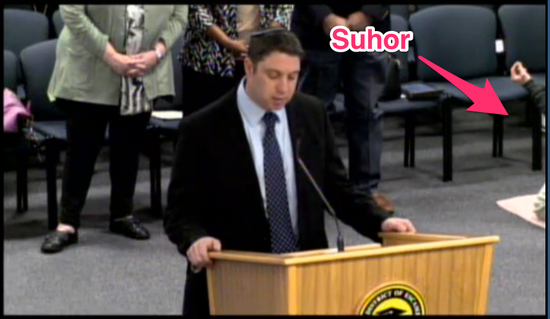 As the Rabbi delivered his prayer, Suhor turned away from the board on his prayer rug near the podium and began chanting his own prayer — loud enough in the opinion of one audience member that he told the board that he was unable to hear the Rabbi’s prayer, which asked for “God’s blessing upon this board, upon the teachers, administrators of this county, and especially upon the students…”

Not a fan of that move at all… If you want to make a point, throwing away your goodwill by acting like a petulant child isn’t going to help. The board members could now dismiss him as merely an annoyance to ignore at all costs if they weren’t doing that already.

But when it was time for public comments, Suhor spoke. First, he called out the pseudo-diversity of the invocation by referring to the rabbi as a “token” Jew, a barb that Bergosh later called anti-Semitic. (I don’t believe that was Suhor’s intention at all.)

Then, as promised, Suhor gave his own Satanic prayer: 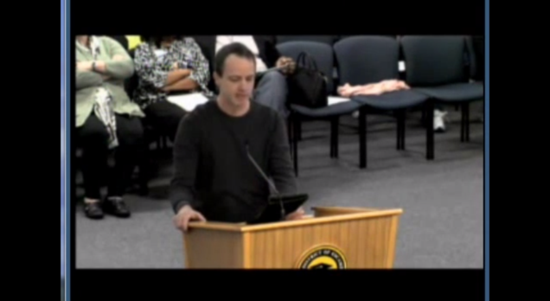 According to Wikipedia, Tokenism is the policy and practice of making a perfunctory gesture towards the inclusion of members of minority groups. It is an effort of including a token intended to create the appearance of social inclusiveness and diversity and so deflect accusations of social discrimination.

I’m ashamed today. I’m ashamed that the District 1 school board member chose to include a “token” Jew — mind you, a religion sharing his God and holy book — instead of truly welcoming religious diversity. I have great respect for Judaism but I cannot understand why a rabbi would take part “for diversity,” as the school board member told me. Meantime, all board members continue to refuse requests from Pagans, Humanists and atheists who have been waiting for 6 months or more. After years of only Christian prayers and excluding others, you can understand why this effort seems disingenuous.

By now you know, your continuing and unwritten policy of refusing invocations from non-Biblical religions is illegal — especially in a school context. It’s not only contrary to the Supreme Court ruling in Galloway — which says that you must include any person wanting to offer a blessing. That case doesn’t even apply here. The four courts that have ruled on school board prayer issues all say you should not be leading prayers at all. I am ashamed that this body flouts the law and continues starting its meetings by asking people to pray against their conscience…

I’d like to get to my alternate invocation today, but first, I’d like to request again that I be allowed to offer an invocation during the regular time and, more importantly, that you offer a written policy — which you have not done.

That said, this is from the Church of Satan:

Hail Satan! Let us stand now, unbowed and unfettered by arcane doctrines born of fearful minds in darkened times. Let us embrace the Luciferian impulse to eat of the Tree of Knowledge and dissipate our blissful and comforting delusions of old. Let us demand that individuals be judged by their concrete actions, not their fealty to arbitrary social norms and illusory categorizations. Let us reason our solutions with agnosticism in all things, holding fast only to that which is demonstrably true. Let us stand firm against any and all arbitrary authority that threatens the personal sovereignty of One and All. That which will not bend must break, and that which can be destroyed by truth should [never] be spared its demise…

So, again, if you can’t include diversity of everybody, don’t even try.

He was supposed to end the prayer with, “It is Done. Hail Satan,” but he ran out of time, partly because audience members began reciting the Lord’s Prayer near the end. (I would call that a dick move, too, but it’s more like payback…)

Bergosh wasn’t in his seat to hear what Suhor had to say because he left while Suhor spoke.

This whole thing is a mess, and it’s primarily the school board’s fault. They’ve turned these meetings into a battle of religious freedom — and if anyone is in the wrong, it’s them, for only giving lip-service to the idea of diversity. They could fix this by either allowing people of all faiths and no faith to sign up to deliver an invocation or doing away with the pointless prayers altogether.

What they’re doing now is picking favorites. And no government body — much less a school board — should be playing that game.

January 23, 2015
Senate Votes 98-1 That Climate Change is Real, but Can't Agree That It's Influenced by Human Activity
Next Post