During an interview earlier this week, Pope Francis reiterated the Church’s opposition to contraception, but noted that people should not feel that they have to reproduce “like rabbits.”

Former Senator Rick Santorum, it turns out, was not at all pleased to hear that comment. 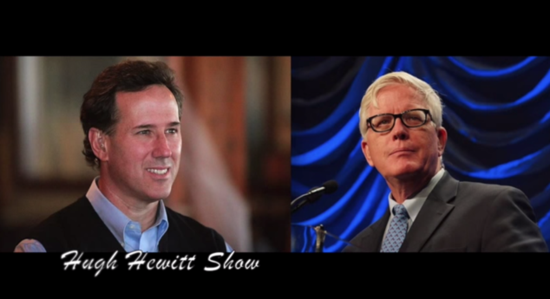 Santorum was on conservative host Hugh Hewitt‘s radio program when asked what his thoughts were on the topic, and his response was not one you might expect from a devout Catholic:

Well, I mean, it’s sometimes very difficult to listen to the Pope and some of the things he says off the cuff, and this is one of them. And I just, I keep coming back to the Pope is the leader of the Catholic Church, and when he speaks as the leader of the Catholic Church, I’ll certainly pay attention. But when he speaks in interviews, he’s giving his own opinions, which I certainly will listen to, but from my perspective, that doesn’t reflect the idea that people shouldn’t be fruitful and multiply, and that people should be open to life as something that is a core value of the faith and of the Catholic Church.

It’s an interesting distinction that Santorum makes between speaking in interviews and “as the leader of the Catholic Church.” I’m pretty sure those interviews are requested because Francis is Pope; and nothing seems to indicate that he is speaking as anything but the Pope. Or does Santorum mean to suggest that he will only “pay attention” when the Pope lays out church policy? Is being Pope like being on the clock, and after hours you’ve no longer got access to the Holy Spirit Hotline? I’m not really sure how this works, and Santorum doesn’t provide much guidance as to which statements constitute ones that we should “pay attention” to versus those we should merely “listen to.”

Hewitt later speculated that “the left will say” that Pope Francis is getting ready to ease restrictions on contraception. Which directly contradicts what the Pope actually said. Either Hewitt was ignorant or assumed “the left” would be. In his response, even Santorum brushed off that idea:

No, well look, the bottom line is that’s not going to happen. I don’t think anyone who seriously looks at this believes that… it’s not possible to happen. I mean, the Pope is the Pope, but the Pope has a lot of other people around him who advise him. And you know, the most important thing is that as a Catholic, I believe he has the Holy Spirit, and the Holy Spirit isn’t going to let him make that kind of mistake.

My favorite part of this isn’t even that they’re talking about Pope Francis rejecting doctrine he just re-stated, apparently unaware of those comments. It’s that Santorum feels confident enough to speak for the Holy Spirit, about what would constitute a misstep for the Pope. The Pope.

Apparently, being the Vicar of Christ doesn’t count for as much as it used to with some Catholics.

January 23, 2015
I Love How This Hospital Thanked a Group of Atheists for Donating Gifts to Patients
Next Post