He said there were “700 no-go zones” in France, adding that Dearborn (Michigan) and Minneapolis were American cities that had been taken over by Sharia law.

That led Rep. Keith Ellison, who represents a large part of Minneapolis and happens to be one of two Muslims in Congress, to send Perkins a lovely Twitter smackdown in the form of an invitation to come visit his city: 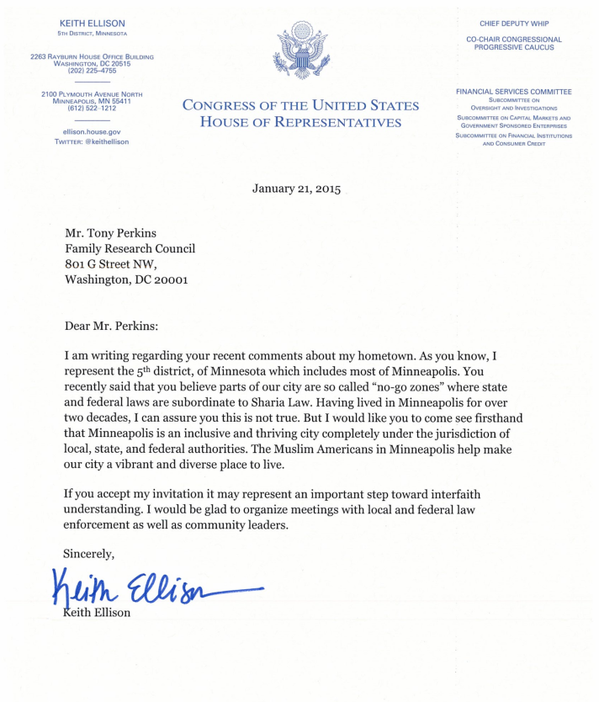 As you know, I represent the 5th district, of Minnesota which includes most of Minneapolis. You recently said that you believe parts of our city are so called “no-go zones” where state and federal laws are subordinate to Sharia Law. Having lived in Minneapolis for over two decades, I can assure you this is not true. But I would like you to come see firsthand that Minneapolis is an inclusive and thriving city completely under the jurisdiction of local, state, and federal authorities. The Muslim Americans in Minneapolis help make our city a vibrant and diverse place to live.

Not that Perkins will take him up on it. To paraphrase Upton Sinclair, you won’t get Perkins to understand something when his livelihood depends on him not understanding it. His job is to spread misinformation. He’s made opposing gay rights and lying about the effects of marriage equality a cornerstone of his personal legacy. That’s why it’s so satisfying to see members of Congress call him out on his bullshit.

January 22, 2015
Leader of German Anti-Islam Group Poses As Hitler, Is Forced To (Goose)step Aside
Next Post