Last night, Bill & Melinda Gates released their 2015 Annual Letter in which they make the bold claim that “The lives of people in poor countries will improve faster in the next 15 years than at any other time in history.”

Well, the letter includes the thoughts of Neil deGrasse Tyson, who puts the 15 year timeline in perspective: 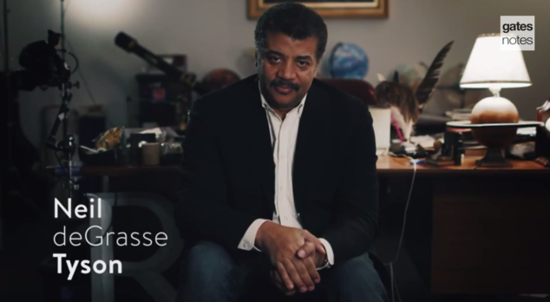 … The cosmic perspective enables you to step back. So I have no problems with a 15 year horizon. In 15 years, we went from no space program in the mid-1950s to boot prints on the moon. I remember the day that, because that was made possible, in our minds, everything else was made possible as well, on the same or shorter timescale.

If we’re gonna bet what 15 years from now will look like, will there ever be the end of war? Perhaps. The end of hunger? Perhaps. But you have to envision it first. You have to bet on it. Then you’re invested in the outcome. That’s where change comes from.

What does it mean to be alive as a human being, with our capacity for thought, when you’re thinking where’s my next meal coming from, and do I have shelter over my head? Poor people, particularly in developing countries, sometimes don’t have the luxury to think about the universe and our place within it.

I would say: 15 years to solve world hunger and poverty?

It took less time to get to the moon.

It may have taken less time, but we also had more political will to take big leaps back then. That will is sorely lacking with our current elected representatives.

January 22, 2015
There's Now a Bible for Minecraft Fans
Next Post

January 22, 2015 Watch Everyone in This Church Raise Their Hand in Agreement That 9/11 Was an Inside Job
Browse Our Archives
What Are Your Thoughts?leave a comment