Mike Huckabee Wants to Protect Us from Our Secular Theocracy (Which Has Zero Openly-Atheist Elected Officials) January 22, 2015 Hemant Mehta

You know what the problem with our government is? Too few Christians. It’s a secular theocracy, really. I mean, with all those atheists in public office, it’s a wonder Christians still have any rights.

That’s just a sampling of what Mike Huckabee said to host James Robison on today’s episode of Life Today, as he explained why he was thinking about running for President: 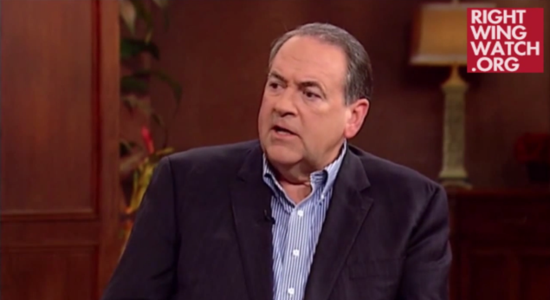 Robison: We have a theocracy right now. It’s a secular theocracy!… Forced on us!

Huckabee: That’s it! It is a humanistic, secular, atheistic, and even antagonistic toward Christian faith, and that’s what we need to understand. Our basic fundamental rights are being robbed from us, taken from us, piece by piece.

A President who prioritizes the Constitution over the Bible? Can’t have that now, can we…?

January 22, 2015 Leader of German Anti-Islam Group Poses As Hitler, Is Forced To (Goose)step Aside
Browse Our Archives
What Are Your Thoughts?leave a comment