Canadian Groups Will Hand Out “Get Out of That ‘Mandatory’ Religion Class!” Cards to Catholic School Students January 22, 2015 Hemant Mehta

Canadian Groups Will Hand Out “Get Out of That ‘Mandatory’ Religion Class!” Cards to Catholic School Students

There are Catholic schools in Ontario that are publicly-funded, yet offer classes in religious doctrine. High school students are allowed to get out of those classes with their parents’ permission — but very few people know that.

Now, some secular groups are trying to change that.

Secular Ontario and Humanist Perspectives will be holding a peaceful protest outside an as-yet-unnamed Catholic school on Friday and hand out these cards to students: 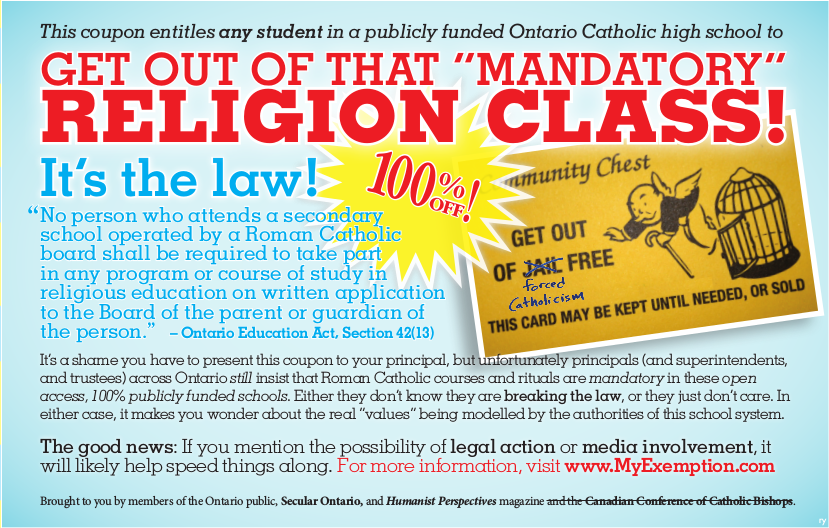 The coupons, which look like something you’d get in a store or magazine, quote Section 42 (13) of the Ontario Education act saying no one attending a Catholic school board is required to take part in any courses or program of religious study if the parent or guardian of the student applies in writing.

“We see it as both a violation of the Education Act and the Charter of Rights and Freedoms,” said Henry Biessel, a retired university professor and member of Secular Ontario. Biessel said that when former Ontario Premier Bill Davis extended public funding to Catholic secondary schools it was on the understanding and written into law that anyone could attend and wouldn’t be compelled to participate in religious instruction.

Brilliant. It’s just a very visible public education campaign, letting people know about a law that Catholic school officials would rather sweep under the rug.

I only hope some students who didn’t know about the exemption before take advantage of it now.

More information about the exemption can be found on the MyExemption.com website.

January 22, 2015 Bible Schools in Illinois Sue to Bypass Accreditation Regulations
Browse Our Archives
What Are Your Thoughts?leave a comment