The American Family Association’s Bryan Fischer is certainly not one to shy away from expressing bizarre opinions, but last week on his show Focal Point, he might have set a new record for the most hilariously contradictory and nonsensical statements uttered in a short time.

It transpired when a caller, Don, wondered, “… how come there’s nobody on AFR [American Family Radio] that will say that Barack Obama’s not a Christian?” The caller speculated that President Obama might instead be a Muslim or a New Age spiritualist and opined that “even” Russian president Vladimir Putin is a Christian. (If only, I guess, we had such a righteous man in charge here…) 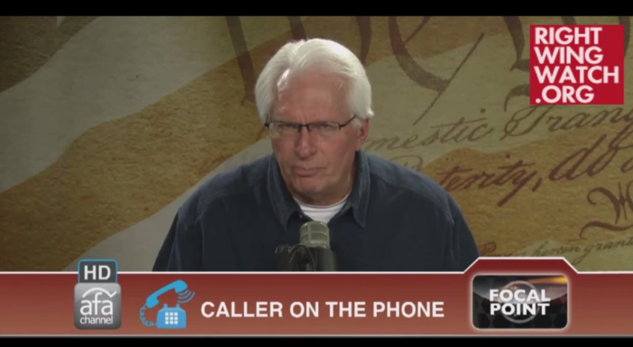 Fischer began by noting that he wasn’t sure that he’d call President Obama a Christian, but he did concede that

… I do not know what goes in Barack Obama’s heart.

And then he promptly speculated on exactly that, declaring that the President certainly can’t be a “sincerely devoted follower of Jesus Christ” because he doesn’t hate gays and abortion like Jesus wants.

Fischer employs a typical conservative Christian line here, in suggesting that anything approaching equal rights and tolerance for the LGBT community is something to be frowned upon, as if Obama is somehow “promoting” certain sexual acts rather than defending equal rights. But it’s not that or the over-the-top anti-abortion rhetoric that really gets me. It’s the part about Jesus’ “very clear” condemnation of homosexuality.

In case you’ve forgotten his famous remarks on the topic, allow me to quote from the Bible:

The same passages also apply to Jesus’ opposition to abortion.

Fischer then moved on, proving that he’s no more an expert on Islamic views of homosexuality than he is Jesus’.

I have to admit, there’s so much wrong with this answer that I can’t find a favorite point. Is it the, shall we say, bold claim that “everybody” in Washington — at least those with any access to the president — says he’s Muslim? Is it how it’s just assumed that the President being Muslim, as opposed to Christian, would be such a worrisome thing? Is it how Fischer tries to walk a tightrope between agreeing that President Obama is Muslim after all while still maintaining (im)plausible deniability?

Probably the most comical part is the mental hopscotch he’s playing here. He jumps from thinking that, because of Christian teachings on the topic, Obama can’t possibly be a True Christian since he supports gay rights… to agreeing that he’s probably Muslim after all, despite Islamic injunctions against homosexuality.

Fischer’s answer is a curious mix of the No True Scotsman fallacy, combined with a powerful display of ignorance and bigotry. None of it is new, but it’s not often you see someone abuse logic, misstate facts, and contradict himself that often in such a short time. It’s comedy and tragedy combined into one brief clip.

January 21, 2015 Mississippi Students Protest Their District's Opposition to the Formation of a Gay-Straight Alliance Group
Browse Our Archives
What Are Your Thoughts?leave a comment