Parents in Frisco, Texas have discovered something rather mortifying about the new high school being built: its name.

The district has picked (for now, at least) the name of “Lebanon High School,” but some local parents find that very troubling: 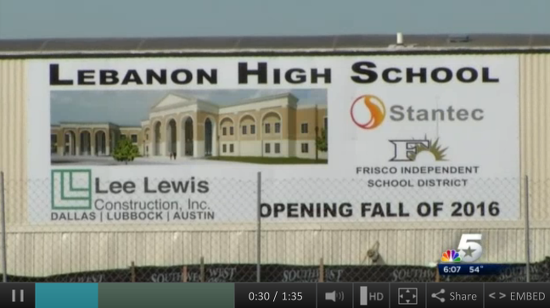 Some parents in the Frisco Independent School District want a name change for the new Lebanon High School, saying the school set to open next year shouldn’t share its name with the Middle East nation and that the community should get a say in naming it.

Robert Mays, one of the parents who objects to the name, declares,

“For a high school name, it doesn’t fit this community.”

And while an uncharitable reading of such a statement could find undertones of xenophobia, seasoned with a pinch of Islamophobia, a more nuanced understanding of the situation finds that this is really just a display of ignorance.

As it happens, Lebanon was the name of the community farmers who took up residence in the area before the city of Frisco was established. References to Lebanon in that context persist throughout the city, including in the names of roads and churches. Indeed, the high school wouldn’t even be the first local school to bear the name — there was a Lebanon School that closed in 1947.

Regardless, some parents believe there are better names to be had, including local mom Liffey Skender, who has proposed a charming alternative:

“The Frisco historical reference is nice. But the present-tense name of a country that was in the news all the time with reference of war and battle ground was always what was on my mind when I would say the name Lebanon ,” Liffey Skender told the board. She added,

“The word Lebanon still reminds me of all the sad and turmoil that goes on in the Middle East.”

She urged the board to reconsider the name — possibly something like Freedom High School — and presented e-mails from others opposing the name.

Skender hasn’t given up the fight, though. She intends to pursue the matter at the next school board meeting. She says, apparently without a touch of irony,

“All we’re asking for is a voice, to be heard and have an open mind.“

That’s a curious statement, indeed, coming from someone who objects to a name that acknowledges her community’s past because she doesn’t like that it reminds her of the Middle East…

January 19, 2015
Mitt Romney's New White House Bid, If Any, Will Be Heavy on His Mormon Faith
Next Post