Despite Impassioned Warning from Board Member, Florida School District Votes to Allow Sectarian Prayers at Meetings

The school board for the School District of Indian River County in Vero Beach, Florida has been considering a resolution that would allow for an invocation at the beginning of its meetings. in the wake of Greece v. Galloway, keep in mind that school boards don’t have the flexibility that city councils have when it comes to sectarian prayers at meetings (since impressionable children may be present). The Freedom From Religion Foundation warned them against it for that reason.

At a meeting last week, when this proposal was voted on, board member Claudia Jiménez (below) gave a stirring speech against adopting the proposal. You can hear it in the video below, beginning at the 18:46:54 mark: 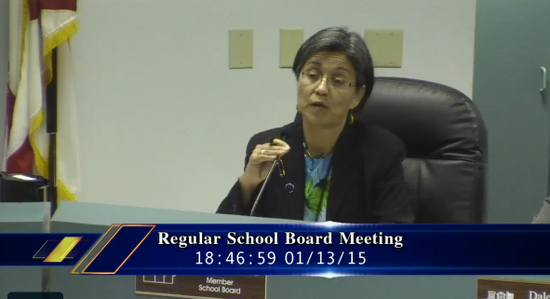 I want to make it clear that, if implemented,… I, as a board member, will continue to be excluded by this policy and practice. I would, however, be very comfortable with a moment of silence or a non-denominational invocation that is welcoming to all faith traditions and not just one in particular, as tends to be the tradition on our board…

For these reasons, I cannot support this resolution. In its place, I ask the board, once again, to consider a resolution that truly respects the rights of religious minorities. I ask that religious minorities such as myself and non-believers, not be excluded. I do not pray in public and do not freely choose to participate in exclusive public displays of religiosity, particularly one that is broadcast on television…

She invoked Bible verses, like Matthew 6:5, in which Christians are told not to pray publicly. She made the case that people who follow that principle — along with non-religious people — would be excluded by the invocations. She suggested a moment of silence instead of sectarian prayers. She even made the case (before her speech) that school boards that held sectarian prayers have been successfully sued.

Basically, she did everything in her power to warn her colleagues that adopting this policy would be inviting a lawsuit. And the audience even gave her a vocal round of applause when she was finished speaking.

After all that, the board voted to adopt the resolution 4-1.

Jiménez was the sole dissenter.

The voice of reason was outnumbered by ignorant Christians more interested in pushing their faith than doing what’s best for students. If they are hit with a lawsuit, thousands of dollars that should be spent educating students will be wasted paying the other side’s legal bills.

I guess FFRF can start looking for some local plaintiffs… and Jiménez can start working on her “I told you so” speech.

January 19, 2015
Pastor Terry Jones Is Beset By Customers of His Furniture-Shipping Company Who Haven't Received Their Possessions
Next Post

January 19, 2015 Mitt Romney's New White House Bid, If Any, Will Be Heavy on His Mormon Faith
Browse Our Archives
What Are Your Thoughts?leave a comment