If you walked past an Army recruiting station near Phoenix recently, you might have seen this sign outside the office: 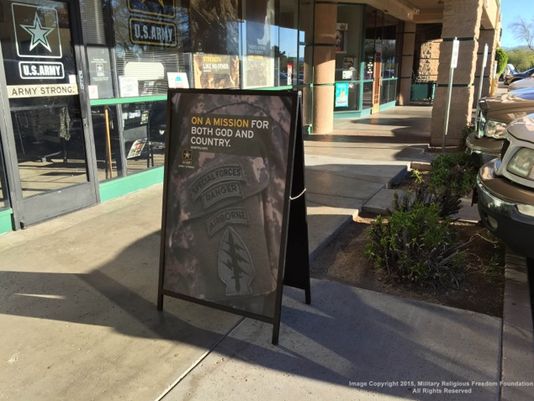 There’s something scary about the U.S. military saying we’re on a mission for God… it’s the sort of rhetoric our enemies are using, offering religious justifications for war and violence.

On Thursday, Mikey Weinstein of the Military Religious Freedom Foundation wrote up a very blunt (and admittedly hyperbolic) assessment of the sign for Daily Kos:

Yet here we find ourselves, ignominiously once again, faced with a disgracefully sectarian message of religious exceptionalism bearing the official U.S. Army stamp of approval. This painfully pathetic poster will no doubt serve, generally, as a red flag of limitless propaganda and, more specifically, as a recruiting bonanza of unbridled proportions for precisely those villains whom the world has united against in Paris, i.e. the Salafi-Jihadists such as Al-Qaeda in the Arabian Peninsula, Islamic State, and myriad other backwards fundamentalists. As if immeasurably emboldening our Islamic enemies wasn’t bad enough, this deplorable poster will enrage our Islamic allies and eviscerate our own service members’ unit cohesion, good order, morale, discipline and military readiness.

Long story short, the poster at the Phoenix armed forces recruitment hub is an absolutely abominable slap in the face of everyone who’s ever taken the time to digest, understand, and swear the servicemembers’ sacred oath to protect and defend the United States Constitution, let alone those who made the ultimate sacrifice for the values, rights, and protections contained therein.

Like I said, it’s over the top for my tastes, but it’s true that the poster had no business being there. And a day later, it was gone:

The poster, which features a Special Forces patch along with Ranger, Airborne and Special Forces tabs, includes “a stock image” the command makes available for local recruiters, spokesman Brian Lepley said in an email, “but the text was changed by the local recruiting personnel” and not cleared by command headquarters.

“Had the process been followed, the copy shown would not have been approved,” Lepley said.

Army Recruiting Command is investigating who ordered and/or approved the display, Lepley said.

Kudos to Weinstein for getting that poster taken down. It really shouldn’t take a large dose of bad publicity to make that happen, but we know that often does the trick.

Soldiers are welcome to fight for their own reasons — including defending their faith — but the U.S. military is not a religious organization and it should never promote itself as one.

January 17, 2015
Thanks to You, a Public Library Targeted by Conservative Christian Activists Just Received a Large Donation
Next Post