Remember when you did good work in school and your teachers gave you gold star stickers? 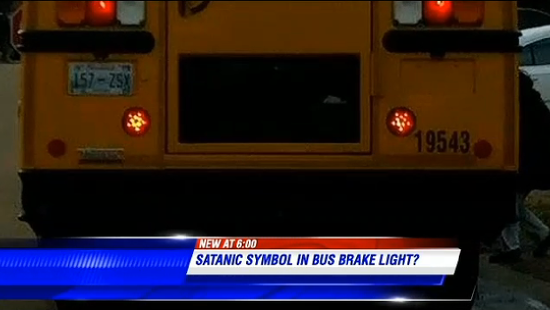 Robyn Wilkins snapped a photo when she noticed the shape of an upside down, five-pointed star outlined in the brake lights of a school bus that was stopped in Cordova.

“Anyone who fears a God, if not God and Jesus Christ, should be outraged,” Wilkins said.

She says Christians should be outraged that a symbol that looks like a pentagram would be allowed in the design of a vehicle used to transport children to public schools.

You know, sometimes a cigar is just a cigar…

Someone do me a favor and never show her the American flag or we’ll never hear the end of this.

January 16, 2015
Supreme Court Will Soon Decide Whether Gay Marriage is Legal Throughout the Country
Next Post

January 16, 2015 Bill Maher: I Was Starting to Like This Pope, But He's Dead To Me Now
Browse Our Archives
What Are Your Thoughts?leave a comment