Pastor Larry Tomczak wrote a piece for the Christian Post last week in which he accused Ellen DeGeneres — along with the rest of Hollywood — of promoting a gay agenda:

“Ellen DeGeneres” celebrates her lesbianism and “marriage” in between appearances of guests like Taylor Swift to attract young girls. 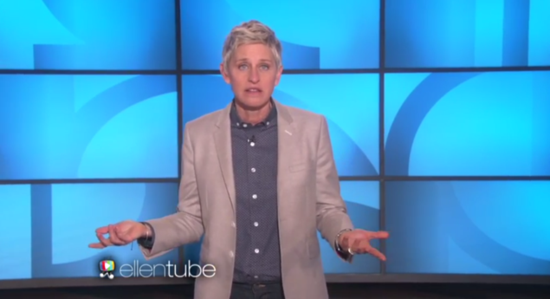 First of all, let’s just break this down, I’m not “married,” I’m married, that’s all.

In the article, the pastor criticizes a lot of TV shows for promoting gay agendas. He says that Glee has over 5 characters. Modern Family had a gay wedding. Anderson Cooper boasts about his homosexuality. If you ask me, Larry is watching a lot of gay TV.

Hilarious. And a perfect example of why so many young Christians are ashamed to be associated with the faith. The bigots offer nothing but paranoia and hate, while people like Ellen are open, honest, and loving.

And for a pastor like Tomczak who rails against the “sin” of gay marriage, his own family life must be wonderful, right?

A pastor known for promoting corporal punishment has been accused of physically abusing a woman for 25 years, beginning during her childhood.

The Rev. Larry Tomczak, an associate pastor at Bethel World Outreach Church in Davidson County near Brentwood, Tenn., was named in a Maryland lawsuit filed against leaders of Sovereign Grace Ministries, a denomination he helped found in the 1980s.

Tomczak also is accused of repeatedly assaulting a woman, who is given the pseudonym Carla Coe, with plastic and wooden sticks. The alleged abuse began when she was a child and lasted more than two decades. When the woman was an adult, the lawsuit claims, Tomczak beat her bare backside.

I’m sure legalizing gay marriage made him act that way, though.

January 15, 2015
Pope Francis: Free Expression is a Fundamental Right, But "You Cannot Insult the Faith of Others"
Next Post