Site That Added Drawings of Muhammad to Cartoons Abruptly Comes to an End January 14, 2015 Hemant Mehta

A few years ago, when Draw Muhammad Day was a thing, a Tumblr began with the premise of adding Muhammad to various comic strips.

It was called “Plus A Drawing of Muhammed” and entries looked something like this:

So I was a little surprised when, after last week’s attacks at Charlie Hebdo, the site’s creator posted this message on the site after a three-year hiatus: 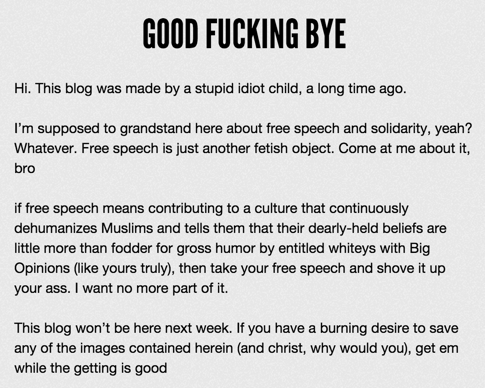 Hi. This blog was made by a stupid idiot child, a long time ago.

I’m supposed to grandstand here about free speech and solidarity, yeah? Whatever. Free speech is just another fetish object. Come at me about it, bro

if free speech means contributing to a culture that continuously dehumanizes Muslims and tells them that their dearly-held beliefs are little more than fodder for gross humor by entitled whiteys with Big Opinions (like yours truly), then take your free speech and shove it up your ass. I want no more part of it.

This blog won’t be here next week. If you have a burning desire to save any of the images contained herein (and christ, why would you), get em while the getting is good

I reached out to the site’s creator a few days ago to ask why he changed his mind and when he came to the decision to shut down the site, but I haven’t heard back yet.

I can understand why someone might regret promoting intentionally-provocative images of Muhammad — the whole “just because you can do it doesn’t necessarily mean you should do it” thing — but there are larger questions of religious criticism and satire that are unaddressed here. That’s fine. It’s not like the site was a space for debate on those issues. Still, I’d be lying if I said I didn’t have questions for him.

January 14, 2015
Saving Christmas and Left Behind Both Nominated for "Worst Picture" Razzies
Next Post