In yet another example of Christian Love, New Hope Ministries in Lakewood, Colorado put a stop to Vanessa Collier‘s funeral just minutes after it was scheduled to begin because they noticed that a video that was supposed to play during the service included an image of Collier kissing her wife: 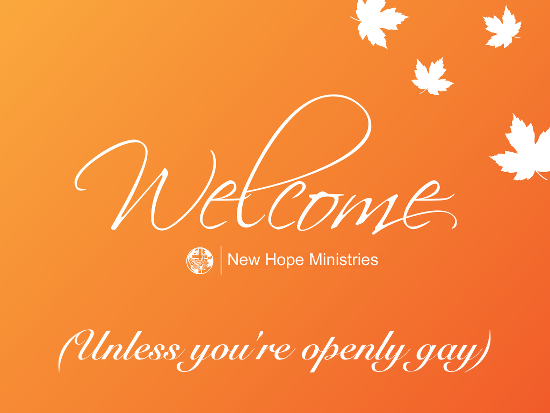 Vanessa Collier’s friends say the funeral was canceled by the church 15 minutes after the service was supposed to start… The open casket and flowers were in place and about 170 people were in attendance.

According to Chaplain Gary Rolando, who would later preside over the funeral across the street at Newcomer Funeral Home, the New Hope Ministry is very community oriented. He says pastors there welcome those who are gay but ask that alternative lifestyles be censored in the church. New Hope Ministries is not commenting on the decision.

How much hate do church leaders have to have in their hearts to ruin a funeral because of their opposition to gay marriage? That’s some Westboro Baptist Church-level shit right there.

They may have every right to do this — no one’s questioning that — but they have no business claiming any sort of moral high ground with actions like this.

What Would Jesus Do? Not taking a hurting family and kick them while they’re down.

Yesterday, in response to the church’s cold rejection, Collier’s friends and family held a “Dignity in Death” rally on her behalf.

And since New Hope leaders won’t know what that word means, I’ll just leave this here.