New Bollywood Film’s Hero is a Committed Atheist… Until Lord Krishna Appears To Him In Person January 13, 2015 Terry Firma

This is a good season for Indian films making light of religious middlemen. Last week, I wrote about PK, a bona fide new blockbuster that ridicules interfaith hatred. Now, there’s another contender in the godmen-are-bullshit genre: Gopala Gopala, which premiered in cities across India yesterday.

To get a sense of what it’s about, the trailer is surprisingly inadequate, so read on for the synopsis. 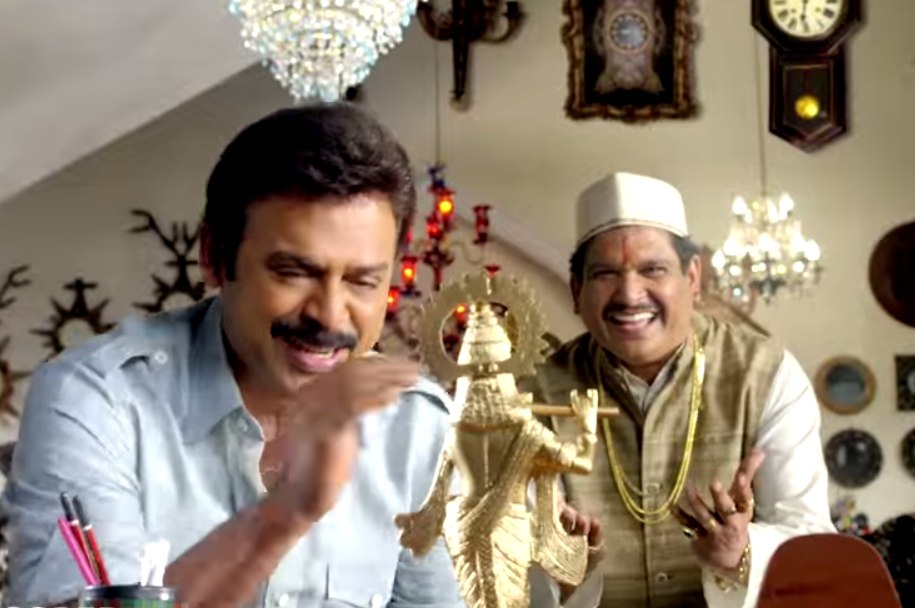 The story revolves around a businessman, Gopal Rao…, an atheist who makes a living by selling idols of Gods. His wife … is a big devotee and never misses a chance to pray for the betterment of her family. When an earthquake destroys his shop and the insurance company refuses to compensate his loss stating that it is an ‘Act of God’, Gopal Rao decides to drag God to court to answer for the injustice done to him. He sends a legal notice to all the Godmen in the nation asking them to repay his losses. Thus ensues a raging court battle.

That’s a really fun premise. Sounds like a movie I’d pay to see. But I’m not sure I’d appreciate the second half as much as the first.

When the henchmen of phony Godmen … try to assault Gopal Rao, Lord Krishna… comes to his rescue.

When his wife and kids abandon him, … God in man’s disguise proves to be Gopal Rao’s only support.

Ah, of course. Krishna descends from heaven in a bespoke western suit to fight for the heroic if clueless non-believer, providing prima facie evidence that atheists have been wrong all through history.

Gopala Gopala is an (ahem) faithful remake of a 2012 Indian movie called OMG (Oh My God). We learn via Wikipedia and the OMG movie trailer how the rest of the Gopala Gopala plot unfolds. (You can also stream OMG in its entirety here, with English subtitles, for $2.99).

Kanji [he’s the Gopal Rao character in the original] points out a passage in the holy books which says that “This world is a creation of God, and it is his will to allow it to grow or destroy,” which strengthens his case. As he nears the end of his argument, he suddenly loses consciousness. He is rushed to the hospital, where doctors unsuccessfully try to revive him, leaving him comatose. They announce to the media that Kanji has been paralyzed, and that only God can now save him.

No surprises about what happens next.

When Kanji opens his eyes, he finds Krishna in front of him. Krishna caresses the left side of Kanji’s body … and Kanji is able to walk again. Krishna then reveals to the confused Kanji that he himself is Lord Krishna, and he has saved Kanji to show him that God does exist.

There are still some pretty smart jokes and subplots in both films that fall on the side of skepticism and freethinking (watch this scene at 0:24); and it seems to me that the tone towards atheism isn’t anywhere near as dark and sneering as it is in U.S. movies like God’s Not Dead and Left Behind. In fact, Gopal Rao/Kanji is roughly as likeable before his conversion as he is afterwards.

Maybe that’s not too shabby for atheists, who will also enjoy the satirical body blows that land on religious merchants, babas, gurus, and other faux-spiritual charlatans.

P.S. A reader points out that the first part of the story line of both Gopala Gopala and OMG seems borrowed from the 2001 Australian comedy The Man Who Sued God, starring the Scottish atheist Billy Connolly.