Last year, the Carroll County Board of Commissioners in Maryland was told by a judge that they needed to stop praying to Jesus at meetings. That didn’t sit well with Commissioner Robin Bartlett Frazier (below) who ended up saying a religious prayer at the next meeting, anyway, falsely attributing it to President George Washington. 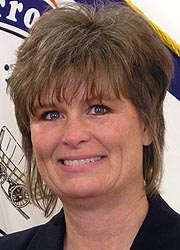 After multiple legal warnings from the American Humanist Association’s Appignani Humanist Legal Center, and the looming prospect of heavy fines if the prayers continued, the commissioners voted 3-2 in April to stop with the sectarian prayers.

Frazier was one of the two commissioners opposed to complying with the law. She even told Christian Today that she would be willing to go to jail instead of following the law.

Carroll County Commissioner Robin Bartlett Frazier decided that she will continue to defy a federal judge’s order against sectarian prayers in board meetings, and is willing to suffer any consequences.

I bring all of this up again because Frazier’s back in the news.

Maryland’s Governor-elect Larry Hogan has tapped State Senator Joe Getty to become his Policy and Legislative Director, which means he’ll have to vacate his seat… and Frazier — who lost her primary for the County Commission last year and then lost again as a write-in candidate — may be taking Getty’s place:

Frazier still has to be confirmed by Hogan before filling the seat. If Hogan rejects the committee’s nomination, he may then appoint any person he wishes.

Del.-elect Haven Shoemaker, R-District 5, said he was shocked when he heard the nomination of Frazier. Shoemaker and Frazier served together in the Carroll County Board of Commissioners, and if Frazier is approved, the two will serve together in the Maryland State Legislature.

“The Republican Central Committee must be nuttier than outhouse rats to select someone who was voted down twice in the last year alone,” Shoemaker said. “To make this decision represents a nullification of the will of the people.”

If Frazier becomes a State Senator, we should all expect more unnecessary attempts at Christian martyrdom from her. There’s already a Change.org petition calling for Gov.-elect Hogan to “deny the Republican Central Committee nomination of Robin Frazier to replace Joe Getty in the Senate.”

At least the Senate is dominated by Democrats, so she can’t burn the place down, but she’s proven that her faith supersedes the Constitution. That’s why she has no business being there.

(Portions of this article were posted earlier. Thanks to Mike for the link)

January 13, 2015 New Bollywood Film's Hero is a Committed Atheist... Until Lord Krishna Appears To Him In Person
Browse Our Archives
What Are Your Thoughts?leave a comment