A Feckless New York Times, Along With Many Other Media, Chickens Out of Publishing the New Charlie Hebdo Cover January 13, 2015 Terry Firma

A Feckless New York Times, Along With Many Other Media, Chickens Out of Publishing the New Charlie Hebdo Cover

I propose that we give the New York Times some new sort of Pulitzer Prize for Top Performance in Eggshell-Walking. I further nominate the BBC for Dhimmitudinal Pussyfooting, CNN for Petrified Around-the-Bush-Beating, Channel 4 for Greatest Advances in Mousiness, and the Associated Press for the Cowardly Mollycoddling of Its Own Collywobbles.

And I’ll tell you what brought that on.

The Times has a news article about the historic new Charlie Hebdo issue that is hitting French newsstands tomorrow,

The Times merely links to the issue’s cover and doesn’t actually show it, and even tries to downplay the measly link with the remark that the image has

… already [been] widely seen on the Internet.

The cowering subtext of that phrase seems to be, “Spare us, dear terrorists, and go after the bloggers and media folks who, like Libération, were insensitive enough to actually publish a picture of the cover.”

It’s true that the cover image has been spreading across the ‘net, but that doesn’t let you off the hook if you lay claim to being a world-class news organization. Today, the Charlie Hebdo cover is the news story, and not just some illustrative eye candy that, if you’re the editors of America’s premier newspaper, you can decide to take or leave.

By the way, this fearful timidity is now business as usual at the Times (disclosure: I freelanced for the paper on and off more than a decade ago). In last week’s Times profile of Charlie Hebdo, the only two covers the U.S. paper chose to print were one ridiculing the French far right, and another that made fun of president François Hollande. Chickenhearted to a

the paper thus sidestepped the issue, tiptoeing gingerly around Muslims’ sensitivities in ways that it doesn’t and won’t for any other group on earth.

It’s not just the Times, to be sure. Pas du tout. I showed last week that editors at CNN, the New York Daily News, the Associated Press, and other media outlets also chose to obscure or deep-six the Charlie cartoons that their colleagues in Paris had been murdered for.

But how can I call other journalists out on their spinelessness when I’m writing under a pseudonym?

I can’t. So let me share another picture with you. 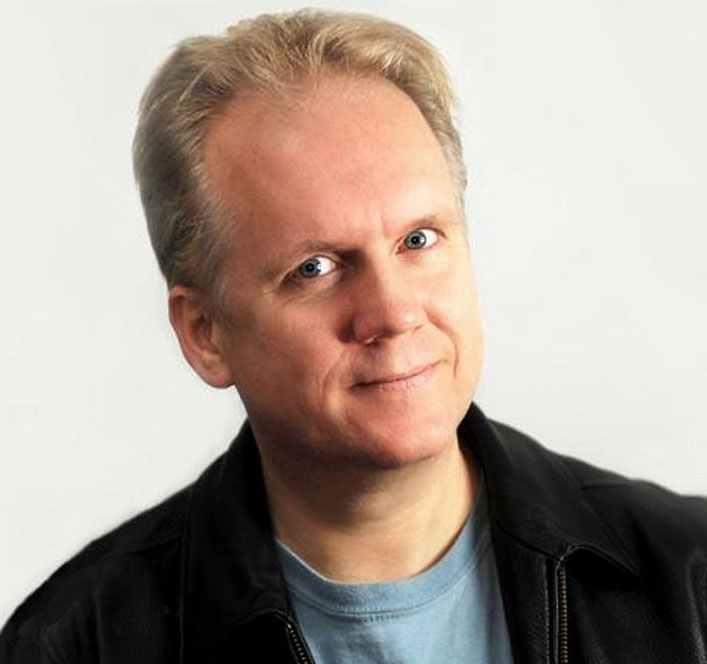 And a name: Rogier van Bakel.

That’s me in the photo. That’s my real name. Violent god botherers, do your worst.

Anyway, the media cowardice is hardly limited to this side of the Atlantic. Guardian columnist Nick Cohen (who calls radical Islam “a real fascistic force”) reminds us that major British media have also handed over their testes to medieval-minded morons, without so much as putting up a fight.

[T]he BBC, Channel 4 and many newspapers won’t run any images of Mohammad whatsoever. They would at least have acknowledged censorship if they had announced that they were frightened of attacks on their staff. They would have clung to a remnant of their honor if they had said: “We are not censoring out of respect. We loathe the murderers who enforce their taboos with Kalashnikovs. But we do not want to spend years living in hiding, as Salman Rushdie did. Or be stabbed in the street, as Theo van Gogh was. Or hear an Islamist smash at our door with an axe and cry: “We will get our revenge,” — as Kurt Westergaard did. So we are backing away.” …

Instead, most journalists have lived a lie for years, as have many in the arts, academia and comedy. We take on the powerful — and ask you to admire our bravery — if, and only if, the powerful are not a paramilitary force that may kill us.

Unless we find the courage to overcome fear, the self-censorship will spread.

Cohen seems to have arrived near a breaking point with his fellow liberals.

European liberals might try to be true to their principles and ally with dissidents, liberals, leftists and free thinkers within Muslim communities. They might help ex-Muslims who fear that one day they will be murdered for apostasy. They might reflect that a Muslim man will encounter xenophobia from the right. But they will hear no rigorous criticism at university or other leftist institutions of the sexism, anti-semitism, homophobia and bloodlust of militant religion.

He sees “a lying and frightened future.” On that note, here‘s how the U.K. Telegraph neutered the latest Charlie cover. It’s enough to make you weep in frustration.

But fear does not have to mean surrender. You can do your job despite it, push through it, shake it off, decide that this is a burden and a risk that we’ll share together, collectively, across the globe.

It’s OK if you decide not to, but then please stop it with the rousing editorials asserting that you stand tall for freedom of expression.

Staffers at the Times, the BBC, CNN, and other media have gone from being real journalists, to printing what the powerful (in this case, men with guns and bombs) want them to. Especially, they now decline to print what the powerful want to see banned. Their entire careers, these media mavens have paid self-congratulatory lip service to the idea that the pen is mightier than the sword. If they believe it, it would behoove them to start acting accordingly.