In the wake of the attack on Charlie Hebdo, Jerry Coyne sticks his neck out with a new piece about multiculturalism. The object of his ire is Reza Aslan, the Muslim scholar, who put in a performance at CNN the other day during which he apportioned blame for Wednesday’s violence to France’s ostensible failure to embrace multiculturalism, rather than faulting the tenets of radical Islam.

After quoting Aslan’s words at length, Coyne observes that there are two kinds of multiculturalism, one of which is toxic.

What is wrong with “multiculturalism”? That depends on how you define it. If you mean “tolerating or celebrating the customs of people from another land,” it’s fine — and desirable. The U.S. would be bland and uniform without its many immigrants, their celebrations and holidays, their food, their politics, their philosophies, and so on.

But when multiculturalism involves importing antidemocratic ideas into a democratic culture, then it becomes problematic. The kind of “multiculturalism” that Charlie Hebdo opposed, and wished to be dissolved by “French” values, was Islam’s veneration of sharia law, its institutionalization of the subjugation of women, its calls for the death of apostates, gays, and adulterers, its belief in corporal punishment for criminals, and the Muslim habit, in some places, of patrolling the streets, looking to find and admonish young Muslims partying, drinking, listening to music, dancing, and associating with members of the other sex. Fun is a no-no.

In other words, the more “enlightened” French are uncomfortable with those tenets of Islam that conflict with the values of the Enlightenment; and it’s just too bad if asking Muslims to conform to those values makes them [Muslims] uncomfortable. By all means keep your Ramadan, your delicious food, your clothing (except, perhaps, the veil), your prayers, your mosques, and so on. But don’t you dare try to quash freedom of speech, beat your wives, kill your daughters, or try to practice sharia law in France.

Just as importantly (if not more so): Don’t try to impose your medieval religious morality on the rest of us. We reject it, no ifs or buts.

Coyne is right to caution against bias toward Muslims (and immigrants in general), calling any hatred or violence against them “odious, bigoted, and reprehensible.”

I should say that I’m not even sure how that number makes sense considering that France has a population of 63 million, about five and a half million of whom (less than eight percent) are Muslim. I suppose that lots of non-Muslims in France love ISIS, too, unless the poll was somehow flawed. (This is not impossible, considering that I caught ICM in a bit of borderline-dishonest opinion polling two years ago.)

But even if the figure of 16 percent is off by, let’s say, half, that still means that close to three and a half million French citizens — presumably, most of them are Muslim immigrants or their offspring — have a fondness for ultra-violent Islam.

In 2006, the Pew Research Center concluded that young Muslims in the U.S. and Europe were radicalizing quickly, as measured by their support for suicidal acts of terrorism.

For France in particular, Pew found that almost half of the country’s Muslims believe that Arab terrorists had nothing to do with the 9/11 attacks (maybe the Mossad or the CIA were behind it?), and that 35 percent (42 percent of Muslims aged 18-29) think that suicide bombings of civilians can be justified if done to “defend Islam.” 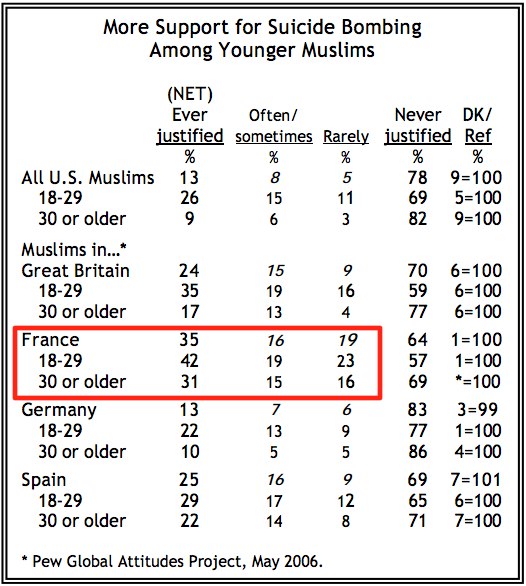 How do you build a thriving multicultural society with those kinds of obstacles blocking the path?

I’m pretty sure that even if all the unconscionable French bias against immigrants were to cease, it wouldn’t for a moment stop the drive of Islamic terrorism to wreck that society. The deep animus of extremist Muslims against Western values per se is just too strong. If you think otherwise, read the Pulitzer-Prize-winning book I constantly recommend: The Looming Tower: Al-Qaeda and the Road to 9/11, by Lawrence Wright. You will find the animus right at the foundation of extremist Islam in the 1940s,

… some three decades before sizable numbers of Muslims from Turkey and North Africa began migrating to continental Europe.

January 12, 2015
Duck Dynasty's Lisa Robertson Says She's Pro-Choice as Long as Other Women Choose to Never Have Abortions
Next Post

January 12, 2015 Saudi Cleric: Snowmen Are Anti-Islamic; Supporter Says They Promote Lustiness and Eroticism
Browse Our Archives
What Are Your Thoughts?leave a comment