Measles Carrier Infects Children at Disneyland… Including Infants Who Were Too Young To Get a Shot January 11, 2015 Terry Firma

An anti-vaxxer (or a no-vaxxer, or a child of either one) seems to have inadvertently infected kids at America’s premier amusement park, says IFL Science.

Nine cases of measles have so far been recorded in an outbreak in California and Utah, and the number is expected to rise. It is thought that many of the infections were transmitted at Disneyland. Predictably, most of those who have become sick were not vaccinated. Infuriatingly, two of them were children who were too young to get the measles shots, rather than being the children of vaccine opponents. 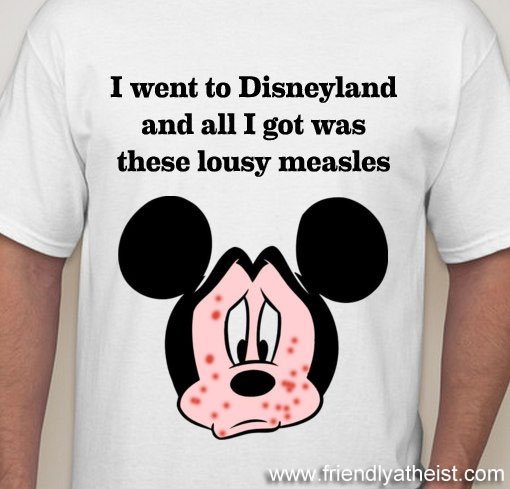 In addition to the nine confirmed cases, health officials say that three more are suspected. “If you have symptoms, and believe you may have been exposed, please contact your healthcare provider,” California state health officer Ron Chapman said. He added, “The best way to prevent measles and its spread is to get vaccinated.”

Unlike Ebola, measles is highly contagious. When its airborne, a single person can potentially infect many others by coughing or sneezing, particularly if they spend a day in a crowded place like Disneyland. If you spend long enough with someone who has measles and you either have not had it before or been vaccinated, you have a 90% chance of coming down with the disease.

Not the kind of sharing we ought to encourage, despite the apparent enthusiasm of Tom Lehrer (who, I’m pretty sure, isn’t talking about measles).