This Crowd Gathered to Watch Raif Badawi Get Lashed

This video shows nothing graphic. And yet it makes me sick to my stomach.

The people in it are supposedly gathering to watch Saudi blogger Raif Badawi get the first 50 (of 1,000) lashes yesterday: 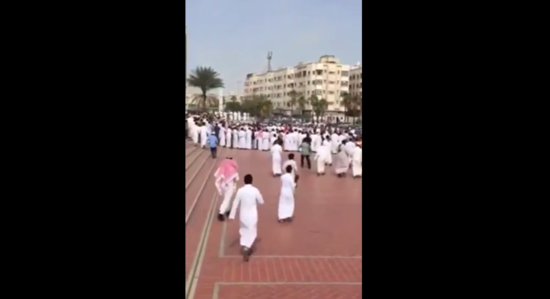 The worst part is seeing kids running to witness the punishment.

By the way, yesterday, I wrote that Badawi reportedly didn’t even flinch as he received his punishment, a brave response. But I couldn’t help but nod along to Paul Fidalgo‘s tweet:

I’m glad to hear how brave @raif_badawi is in enduring this torture, but I’d admire him just as much if he was falling apart and wailing.

The officer beat Raif on his back and legs, counting the lashes until they reached 50.

The punishment took about 5 minutes. It was very quick, with no break in between lashes.

Raif was taken away in the bus, back to prison. The whole scene had lasted less than half an hour.”

What a shitty week for free speech everywhere…

January 10, 2015
Pastor Brags About Punching a Bright Kid in the Chest Because He Didn't Take the Lord Seriously
Next Post