Why Do Cartoonists Draw Insulting Images of Muhammad? (Spoiler: Not Just to Upset the Religious) January 8, 2015 Hemant Mehta

Why Do Cartoonists Draw Insulting Images of Muhammad? (Spoiler: Not Just to Upset the Religious) 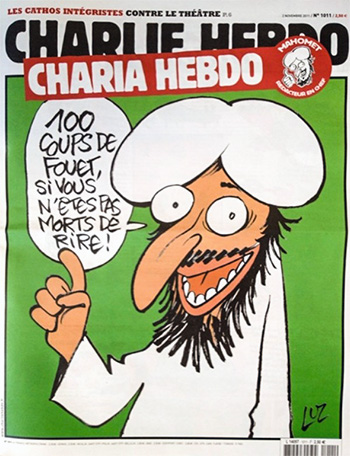 … more often than not, the lampooning is done with the intention of shattering, if only for a moment, the protective façade of reverence and deference that has been erected around some iconic figure or belief, so that we can all catch a glimpse of how things really are. At such times, lampooning can become great art.

Over the past few years, a lot of those cartoons have been drawn in response to the outrage by religious extremists (and not just a few moderates) — and yesterday’s attacks on Charlie Hebdo should spur us all to spread those images as much as possible. There’s another reason for that, too, says Law:

We can, as Ayaan Hirsi Ali nicely put it, ‘spread the risk’. If we all stand up and repeat what caused the supposed ‘offence’, then tomorrow any individual who might have self-censored out of fear will realize they’re not an isolated target, but just one target amongst countless thousands. The risk is spread between us to the point where the danger faced by any one individual becomes negligable again.

Most of these cartoons would never have been drawn if the extremists didn’t make such a big deal about it. Instead, their reactions began an arms race between pens and swords, and our side can’t stop drawing anytime soon.