“Traditional Values” Are Losing Ground with Voters and We’re All Better Off as a Result January 8, 2015 Hemant Mehta

When you hear politicians talk about “traditional values,” it’s usually just code for anti-gay, anti-women, pro-Christianist thinking. Saying gay people should not be allowed to marry may be politically toxic these days, but no one has a problem with “values,” right?

I’m happy to say that voters, who may finally be catching on to the con, are caring less and less about traditional values these days. Aaron Blake at the Washington Post explains: 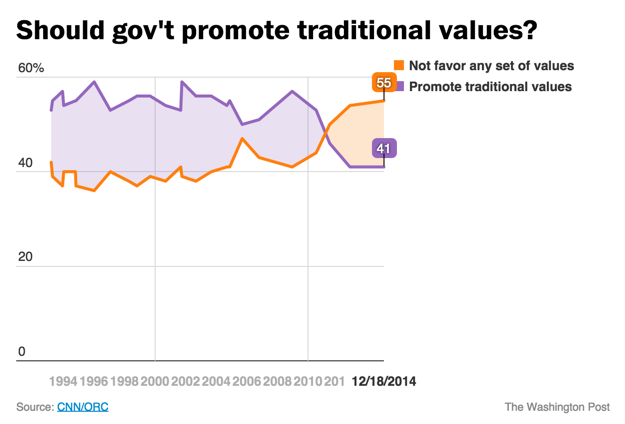 Shortly after the 2004 election, a CNN/Opinion Research poll showed 55 percent of Americans said their government should promote “traditional values” in American society, while 41 percent wanted the government not to “favor any set of values.”

Fast-forward to today, and those numbers are flipped.

The problem isn’t values, of course; it’s that we’re always talking about one brand of values that many Americans don’t believe are ethical at all. The government has no business making those decisions for us — certainly not when it means blocking or eliminating the basic rights of a segment of Americans.