Yesterday’s bloodbath at Charlie Hebdo begat another tragedy: Not since Comedy Central heavily censored an episode of South Park in 2010, to stave off reprisals from angry Muslims, has so much media cowardice been so nakedly on display.

Or maybe the previous low-water mark was set just a year ago, when Channel 4 in England, reporting on a comic-strip controversy involving Jesus and Mo, placed a censorious black blob over the Muslim prophet’s character, so as not to give “offense” to thin-skinned believers.

That kind of pusillanimity is now really getting around. From the Huffington Post:

Many outlets have censored their coverage of the publication’s depictions of the Prophet Muhammad.

The New York Daily News opted to obscure the front page of a Charlie Hebdo publication in its coverage of the attack. It blurred a cartoon from a 2011 Getty photo of Charlie Hebdo Editor Stéphane “Charb” Charbonnier, who was among those killed in Wednesday’s attack. The Daily News did not immediately respond to a request for comment. 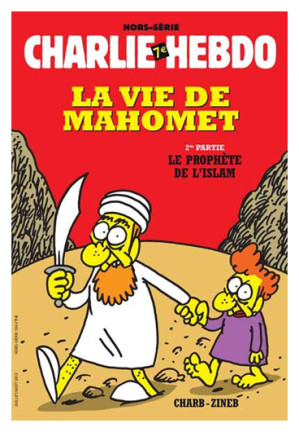 The Telegraph took a similar approach and blurred the cover of a Charlie Hebdo paper in its live blog, then ultimately removed the image entirely, reports Politico.

A second photo on the Telegraph, in which Charbonnier poses with an edition of Charlie Hebdo, is tightly cropped.

CNN has also chosen not to show any Charlie Hebdo cartoons that could offend Muslims. In a memo sent to staff Wednesday afternoon, CNN senior editorial director Richard Griffiths encouraged reporters to instead “verbally describe the cartoons in detail,” a separate Politico report notes.

Which is insane in an especially chickenhearted sort of way. If a visual joke could be adequately described in mere words, there would’ve been no need for anyone to draw anything in the first place.

Charlie Hebdo is all about the cartoons. You can describe some of them in a pinch, I suppose, but the exercise is about as bizarre and pointless as taking a shower in a wetsuit.

A wire image of [murdered editorial director] Stephane Charbonnier released by the Associated Press also does not include the Charlie Hebdo cover. A spokesman for the AP told the Huffington Post the move is in line with the organization’s “longstanding policy that we do not move deliberately provocative images on the wire.”

Also, I couldn’t help but notice that in yesterday’s New York Times profile of Charlie Hebdo, the only two covers the U.S. paper chose to print were one lampooning the French far right, and another that made fun of president François Hollande.

Way to sidestep the issue.

This craven capitulation to fear — to terror, to be precise — is a sad indication of how our mainstream media now operate. By contrast, Twitter, Facebook, and blogs were chockablock with proudly uncropped, unpixelated Charlie covers, as were some new-media outlets such as the Daily Beast, which yesterday posted a no-punches-pulled sixteen-cartoon gallery that was heavy on Mohammed jokes. Kudos.

Ironically, the headline over the Times piece read: “Proud to Offend, Charlie Hebdo Carries Torch of Political Provocation.” It is beyond regrettable that the Times and other big news organizations go out of their way to practice the gutless opposite of that approach.

January 8, 2015
Ayaan Hirsi Ali: "I Have to Outlive a Generation... Whose Minds Have [Been] Contaminated with This Ideology"
Next Post