Remember the recent case in Myanmar of the bar owners who got arrested and threatened with serious jail time after they’d Facebook-posted a colorful image of a Buddha wearing headphones?

Despite removing the image and replacing it with a statement apologizing for “embarrassing ignorance,” [New Zealander Philip] Blackwood was arrested on December 10 along with nightspot owner Tun Thurein, 40, and co-worker Htut Ko Ko Lwin, 26. 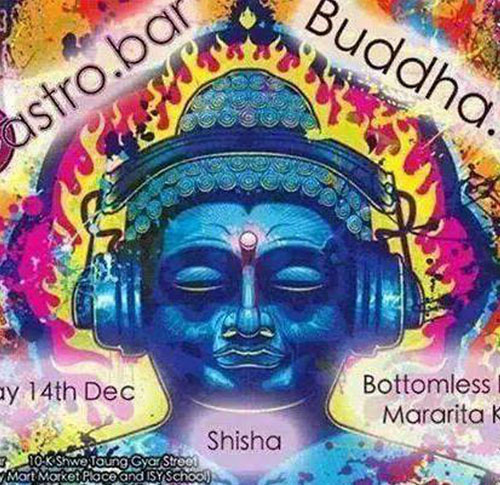 NBC News has an update, including this stark fact:

Blackwood is being held in Myanmar’s notorious Insein prison where he is potentially facing a four-year jail term.

So sensitive are religious issues in Myanmar just now that Blackwood was initially unable to find a lawyer willing to represent him. Riot police have been drafted in for the trio’s court appearances as supporters of the Buddhist nationalist 969 movement gathered outside. The lawyer who eventually agreed to take on the New Zealander’s case, Mya Thway, has said he had since received anonymous messages on Facebook threatening to “cut him to pieces and burn him” for doing so.

… a blogger and activist who was imprisoned between 2008 and 2012 for his online writings about the country’s then-military rulers. [His organization] aims to promote responsible use of social media, while upholding the principles of free speech, long oppressed in Myanmar.

But the gadfly’s commitment to free expression only goes so far.

Nay Phone Latt, who [was] featured on TIME’s list of the world’s most influential people in 2010, said he didn’t believe Blackwood and his co-defendants should be jailed but added that he didn’t agree with their Facebook post. “It is difficult to stand on their side,” Nay Phone Latt said. “Every religion has to respect others if we want to stay together peacefully. I am a Buddhist and liberal thinking, but I don’t like that kind of thing — it’s wrong to use an image of the Buddha in that way.”

Really? “Every religion has to respect others if we want to stay together peacefully”? Is that a threat? Is it intended to sound almost as objectionable and illiberal as Muslim leaders insisting that their religion, too, is above reproach, criticism, and spoofing, or else?

In any case, the only proper response here is “Bite me,” unless you’re Blackwood and you’d understandably like to regain your freedom. The man is going to have to continue to apologize and grovel until his captors tire of him doing so and finally release him. Whenever that day comes, the international image of Myanmar will have suffered much more than Buddha’s potential to be harmed by a groovy psychedelic picture.

January 8, 2015 Why Do Cartoonists Draw Insulting Images of Muhammad? (Spoiler: Not Just to Upset the Religious)
Browse Our Archives
What Are Your Thoughts?leave a comment