***Update***: Metaxas attempted to clarify his position to Warren Throckmorton here, though I’m still as confused as Warren.

As it turns out, however, Metaxas also made an interesting comment to Christianity Today regarding buying your way onto that list — like disgraced Pastor Mark Driscoll did:

“Anyone thinking there is something pure about that list does not understand the system and how it works,” [Metaxas] said. “I would even argue that trying to get on that list is a combination of a realistic sense of the market and good stewardship. When you understand … the Times list is a bit of a game … you realize being on that list has less to do with the actual merit of a book than with other, far less important factors.”

He’s not wrong that people will game the system to get on the list — writers do it on Amazon all the time, trying to get their fans to buy the book in the same hour in order to jump up the top of the charts there. In the case of Driscoll, his church paid a marketing company (ResultSource) more than $200,000 to basically buy up a bunch of copies of his book and make it look like they came from all over the country. Totally shady. Even Driscoll later admitted it was the wrong thing to do.

So why would Metaxas say it’s okay? It’s a little weird for a professional writer to both celebrate getting on that list and admit that it’s all a scam, right?

Laura Turner of Religion News Service says he has a responsibility as a Christian to take the proper route to the best sellers list:

… Whether the system is pure, our responsibility as Christians remains the same: You do the work, and you don’t lie about how well it does.

Are we so convinced that the message justifies the means that we will engage in dishonesty to spread the gospel? That, after all, isn’t a story to sell.

When we trust in the means of sharing rather than the goodness of the story, we are selling everything short. When we make excuses because the list isn’t “pure” and because the system can be gamed, we aren’t being true to the story we tell. This all comes because we get too anxious about our platforms and our standing and don’t concern ourselves enough with the truth — the truth about the gospel, the truth about ourselves, and the truth about broken systems. The success of your book is never more valuable than who you are as a person, and if you are a person who engages in deception to boost your sales numbers, you ought to take a long, hard look at yourself.

As someone who doesn’t believe Christian and ethical have ever been synonymous, I have the same complaint as Turner, but purely on an ethical level. I don’t actually care if he cheated his way onto the list. I understand what that “best seller” description does for you. I understand that other authors do it.

I just want him to admit it if he did. (That goes for all authors, not just him.)

That means not putting a line saying the book is a NYT best seller on the cover. Use this badge instead: 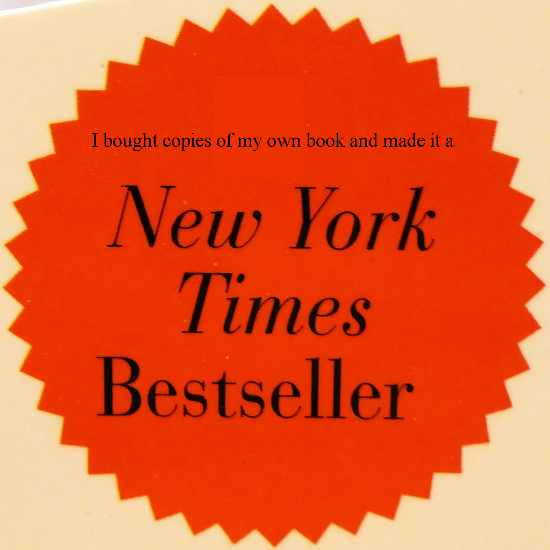 January 8, 2015
Why Do Cartoonists Draw Insulting Images of Muhammad? (Spoiler: Not Just to Upset the Religious)
Next Post

January 8, 2015 Texas Republican's Bill Would Withhold Salary from State Employees Who, in Future, Issue Gay Marriage Licenses
Browse Our Archives
What Are Your Thoughts?leave a comment