Ayaan Hirsi Ali: “I Have to Outlive a Generation… Whose Minds Have [Been] Contaminated with This Ideology” January 8, 2015 Hemant Mehta

Ayaan Hirsi Ali: “I Have to Outlive a Generation… Whose Minds Have [Been] Contaminated with This Ideology”

In case you missed it last night, Ayaan Hirsi Ali, the former Muslim whose friend Theo van Gogh was assassinated by Islamic radicals more than a decade ago, appeared on Anderson Cooper 360 to speak about yesterday’s massacre: 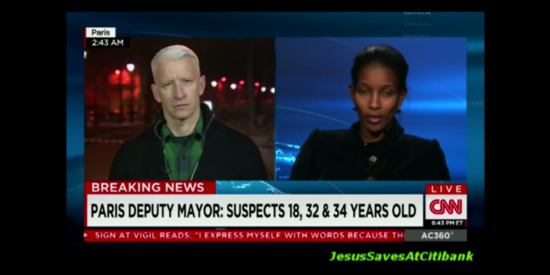 Her words were more cautious than I’m used to hearing and it was a better conversation because of it. She made clear that her criticism — of which there was plenty — was directed only at the extremists, not all Muslims in general. (“We are not at war with Islam, but within Islam is a radical movement that has declared war on us.”)

She also added that the “grim truth is, for me to be safe, I have to outlive a generation of young minds whose… minds have [been] contaminated with this ideology.”

A somber reminder that the most vocal critics of Islam, like Hirsi Ali and Salman Rushdie, have had to look over their shoulders for years now all because of an ideological virus that continues to plague people today.

It’s a really powerful segment — one that even the Yale Atheists, Humanists, and Agnostics might be able to sit through without getting offended. I hope you watch it.