In 2011, the satirical French newspaper Charlie Hebdo ran this cover: 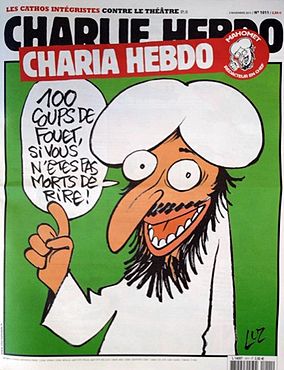 For that, Hebdo‘s offices were firebombed and their website was hacked (with messages like “No God but Allah”).

A week after that, the staff, moved to another office, wasn’t skipping a beat. Not only did they defend “the freedom to poke fun,” they created a special cover for their next issue: 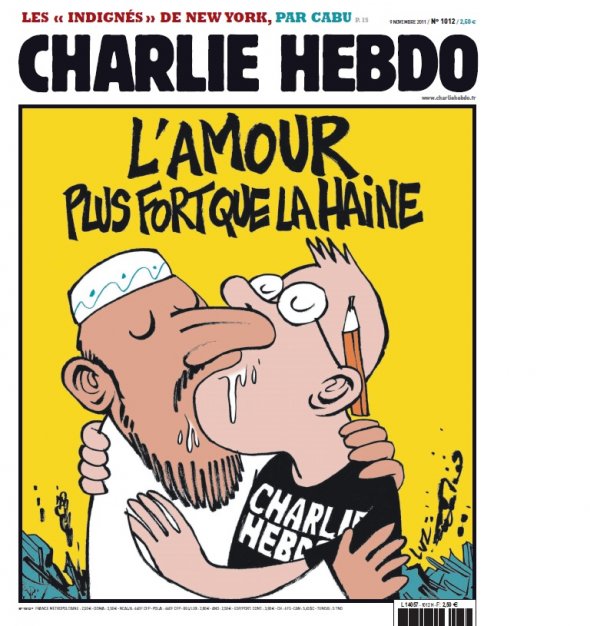 The words translate to “Love is stronger than hate.”

They were right back at it last year with a cover reading “The Koran is crap; it doesn’t stop bullets.” 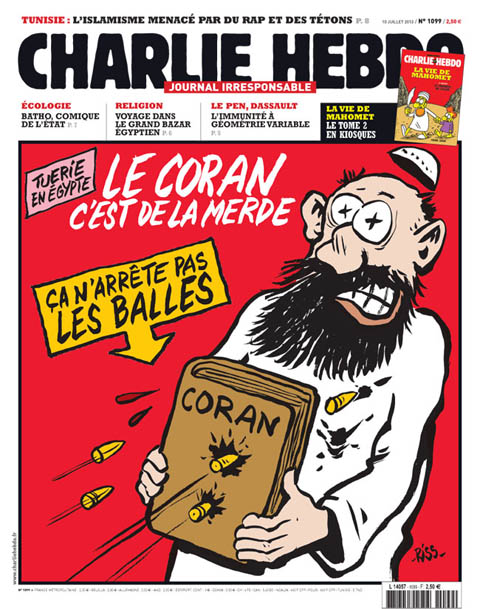 French Muslims sued them over that cover — even though “blasphemy” isn’t a crime in the country.

Earlier today, we learned that the offices of Charlie Hebdo had been attacked by “masked gunmen”:

French President Francois Hollande said the attack on the Charlie Hebdo weekly, which has frequently drawn condemnation from Muslims, is “a terrorist attack, without a doubt,” and said several other attacks have been thwarted in France “in recent weeks.”

While details are still coming in — and I think it’s important not to jump to conclusions until that happens — I sincerely hope no one suggests that the magazine deserved any of this because of their pointed satire. Furthermore, I hope the public reaction — beyond horror and sympathy for the victims — is support for their right to criticize Islam… and everything else, for that matter. Based on the events in 2011, and possibly today, I’d say there’s even more reason for them to keep doing it.

If, indeed, we find out that this was the work of radical Muslims, then I will repeat what I said in 2011: If extremists are going to resort to violence, the solution is to keep the images coming until they become immune to them. We must remind the public that freedom of the press doesn’t mean everything is open to criticism except Islam. And even if moderate Muslims condemn the violence, they need to say that others have every right to mock their faith without fear of retaliation. Their faith may have rules about not drawing images of Muhammad, but the rest of us are under no obligation to abide by them.

We are horrified to learn of the attack on the offices of the Paris-based satirical magazine Charlie Hebdo. No journalists should face violence for what they publish — and any attack on journalists is an attack on freedom of expression.

***Update 2***: There’s reason to believe the gunmen were members of Al Qaeda:

“We’ve avenged the honor of the prophet!” the killers shouted, according to witnesses who spoke to Sky News. The gunmen spoke French without any accent, according to Le Monde

Cartoonist Corine Rey, aka “Coco,” told the weekly Humanité that she let the men inside the building of Charlie Hebdo after being ordered at gunpoint.

“They spoke perfect French,” she said. “They said they were Al Qaeda.”

***Update 3***: The Center for Inquiry issued this statement and reprinted an article about the Muhammad cartoons (with images) from 2006:

We are heartbroken by the unthinkable and cowardly attack at the magazine Charlie Hebdo in Paris today, and outraged that such a barbaric act was a response to journalists and satirists exercising their right to free expression.

As a show of support for free expression and the staff of Charlie Hebdo, CFI plans to prominently display on our website (http://www.centerforinquiry.net) the cartoon of ISIS leader Abu Bakr al-Baghdadi that apparently was one of the motivations for the attack. We will not be cowed by the savagery of those few who would like to see the world dragged back to the Dark Ages, who will kill to protect their backward ideologies from criticism, and we will continue to fight for the right of all people to dissent, to satirize, and to freely speak their minds.

“Religion, a mediaeval form of unreason, when combined with modern weaponry becomes a real threat to our freedoms. This religious totalitarianism has caused a deadly mutation in the heart of Islam and we see the tragic consequences in Paris today. I stand with Charlie Hebdo, as we all must, to defend the art of satire, which has always been a force for liberty and against tyranny, dishonesty and stupidity. ‘Respect for religion’ has become a code phrase meaning ‘fear of religion.’ Religions, like all other ideas, deserve criticism, satire, and, yes, our fearless disrespect.”