Charlie Hebdo: A Massacre Nine Years in the Making, No Thanks To Yellow-Bellied European Leaders January 7, 2015 Terry Firma

Charlie Hebdo: A Massacre Nine Years in the Making, No Thanks To Yellow-Bellied European Leaders

For me, today’s news of the Charlie Hebdo massacre in Paris almost immediately called to mind the cowardice of sundry political leaders back in 2006.

Let’s not forget this: when Charlie Hebdo courageously re-published the Danish Motoons,

French President Jacques Chirac described the move as a “provocation“.

[Germany’s] Angela Merkel, hedging her bets, made a lame and half-hearted defense of freedom of speech which she implied had to be balanced against the need to show respect to Muslims: “We need to learn to show mutual respect for each others’ views and feelings as well as to develop our shared values.” 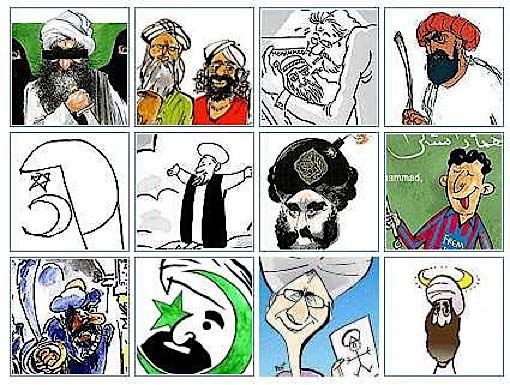 Jack Straw, [the U.K’s] Foreign Secretary at the time, denounced newspapers that had shown some genuine solidarity in the cause of free speech by saying: “I believe the republication of these cartoons has been unnecessary, it has been insensitive, it has been disrespectful, and it has been wrong.”

A few years ago, when Charlie Hebdo was about to publish a cartoon cover featuring Mohammad being pushed along in a wheelchair by an Orthodox Jew, the French government asked the staff to stand down.

The French government … appealed to the editors not to go ahead with publication, and when they went ahead anyway it shut down embassies, cultural centres and schools in 20 countries out of fear of reprisals.

And so, ask the editorial writers at the U.K. website The Commentator:

Which part of this message are we expecting the Islamists not to get? … So called “radicalized” Muslims do not need to go to Syria to believe they have a right to kill people in the name of their religion, as we have seen with many other terror attacks in recent years. They believe they are attacking soft and weak targets in the West because all too often (just re-read those quotations above) we have shown that we have turned ourselves into soft and weak targets.

Twelve Parisians went to work this morning, expecting it to be a normal day with coffee and camaraderie and laughter and deadlines. Those people are now dead for making jokes, their families uncomprehending and devastated, and much of the European continent is in tears, on edge, or both.

Meanwhile, Western media continue to literally obscure the facts, as my friend Walter Olson points out:

Even after today’s events, many Western broadcasters and publishers continue to pixilate or blur out the Charlie Hebdo images — not the images of slaughter in Paris streets, but mere cartoon images of men in Middle Eastern garb.

What do you want to bet that from now on, consistently and with an actual spine, politicians and civic leaders and media barons will call Islamist terrorism by its name? Or that they will defend — truly stand tall for — the right of all citizens to say, write, draw, and publish any religious joke at all?

As they’ve done before, over the next two or three days European leaders (and American ones) will mumble and bumble their way through tepid, half-hearted defenses of free speech. But increasingly, their bromides will be accompanied by reminders that we must be “sensitive” to other people’s religions, and that we ought to “show respect” for their beliefs. That tiresome gambit plays well to Muslims like these (moderate ones, I’m afraid): 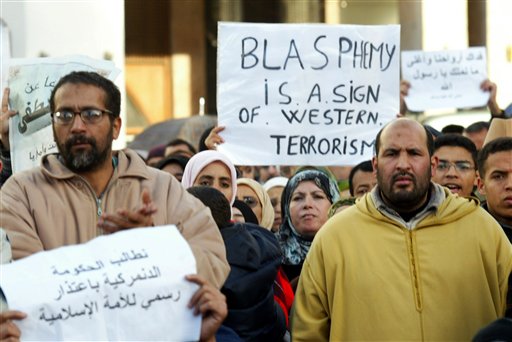 Basta. Islamists — not all Muslims; Islamists — are a cancer. We do not owe them politeness and respect and sensitivity, just as we owe none of those things to any malignant cells in our own bodies. Summoning courage and ruthlessness and precision, we cut them out and survive… or we let them fester, with fatal consequences.

What we do owe, aside from a debt of lifelong gratitude to Charlie Hebdo and its horrifically decimated staff, is the determination to never let the magazine’s spirit of playful insolence be silenced by assholes with guns and bombs.

P.S.: While I’m predicting, I might as well take a stab at the expected response from the average Muslim leader, too. This 2006 cartoon, by the San Diego Union Tribune‘s Steve Breen, sums it up nicely:

January 7, 2015
Appeals Court Rules That Westhampton Beach Eruv Can Remain in Place, to the Delight of Orthodox Jews
Next Post

January 7, 2015 I Am Charlie
Browse Our Archives
What Are Your Thoughts?leave a comment