A few years ago, Steven Hewett, a former police officer and veteran of the war in Afghanistan (where he received a Combat Action Badge and a Bronze Star), took a stand against a Veterans’ Memorial in King, North Carolina, where he had lived since 1999:

What’s wrong with that memorial? All the ways it promotes Christianity.

Like this Christian flag that was one of eleven surrounding the memorial: 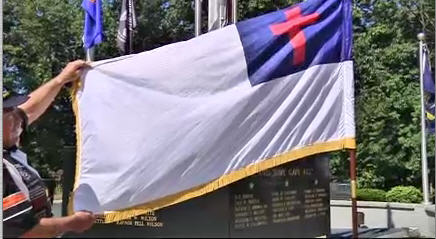 And don’t forget the kneeling Christian soldier and all the prayers:

Next to the Christian flag, the City built a statue of a soldier kneeling before a cross (“the Cross Statue”). Official, City-sponsored events to commemorate Veterans’ Day, Memorial Day, and September 11 have consistently featured multiple Christian prayers delivered by City officials and invited clergy. And a variety of other practices have reinforced the City’s commitment to promoting Christianity and ostracizing anyone with different religious beliefs.

In 2010, the city (on the advice of lawyers) recognized that a permanent Christian flag at the memorial could be problematic, so they held a “lottery” to decide what flag could go in its place… presumably knowing that Christians would overwhelm the application process.

“A truly open public forum would not result in the nearly exclusive display of a Christian symbol,” Americans United Senior Litigation Counsel Gregory M. Lipper said. “In this case, the city is clearly exploiting the memory of deceased veterans in order to promote a single faith.”

When Hewett spoke with King City Manager John Cater at the time, Cater responded to the veteran by telling him he would have to answer “to God and Jesus Christ upon [his] death” for complaining.

It was clear to Hewett that the memorial was being used to promote Christianity rather than honor all the veterans. So, with the help of Americans United for Separation of Church and State, he filed a lawsuit against the city:

“The United States armed forces are highly diverse,” said the Rev. Barry W. Lynn, executive director of Americans United. “To have a veterans’ memorial that only honors soldiers of one religion is not only a violation of the First Amendment, but also an insult to the memory of non-Christians who served their country.”

Hewett is also asking for the removal of a statue erected at the memorial that depicts a soldier kneeling before a cross.

The lawsuit wasn’t about money. (Because he had to request something, Hewett asked for just $1.) For him, this was about principle and showing respect to all veterans instead of just the Christian ones.

Incidentally, filmmaker Scott Burdick made a documentary about this whole case. You can watch it here:

I’m happy to say there’s finally a resolution to this whole mess.

Yesterday, city officials voted 3-2 to accept a settlement offer, effectively ending the lawsuit. I wish I could tell you the decision was made because they realized this was a losing battle and they were wrong this whole time, but really, they said they’d already spent $50,000 on this case and “litigation costs and fees were estimated to approach $2 million, without any assurance of a successful outcome.” The city’s insurers were urging them to settle because they weren’t going to cover potential losses.

I can’t say I feel bad for them. But if they didn’t understand church/state separation before, the terms of the settlement will make that idea very clear:

What’s amazing is that the two city officials who voted against accepting the settlement admitted it made financial sense, but their faith prevented them from voting yes.

“The decision I looked at that overwhelms everything else involved is that before I am a council member, before I am a husband, before I am a father or a brother or a son, is that I am a Christian,” [Brian Carico] said. “Every word and deed I do is supposed to be in the name of Jesus Christ and I am sorry if certain people disagree with that, but I don’t disrespect you. I do ask that you respect that that is how I have to make a decision. I can’t vote to remove anything from that memorial because the intent is not there for anyone to be offended. Every veteran that memorial honors took an oath of God and country and they knew what God they were speaking of.”

I thought being a Christian meant not lying, but Carico freely ignores that rule, claiming that every veteran took an oath to the Christian God — which is obviously not true.

The other dissenter, Wesley Carter, claimed the Christian majority was just being bullied by those damn dirty atheists:

“I feel like we live in a town that is inclusive,” he added. “This city has never tried to keep out other people’s religious beliefs. We have never tried to do that but yet, we have been accused of showing favoritism.”

He said the memorial was only intended to honor the city’s veterans in the best way possible.

Yeah, how dare that war veteran defend the Constitution?! There’s nothing more un-American than that!

Both men maintain that they’re in the right, by the way, even though their lawyers basically told them “Stop fighting this because you’re going to lose.”

It doesn’t matter, though. They were outnumbered and this case is finally over.

King is now home to a memorial that will honor all the veterans, not just the Christian ones, which is just as it should’ve been from the beginning.

January 7, 2015
Atheist Delivers Invocation at Chico City Council Meeting: "In the Face of Adversity, We Need Not Look Above"
Next Post