The Guy Who Taught Us “How Stuff Works” is Ready to Explain Why God Doesn’t Work January 6, 2015 Hemant Mehta

In 1997, the aptly-named Marshall Brain began a website that became a phenomenon: How Stuff Works. For years now, he’s been the guy who explained the inner workings of things we take for granted.

His new book is called How “God” Works: A Logical Inquiry on Faith (Sterling Ethos, 2015): 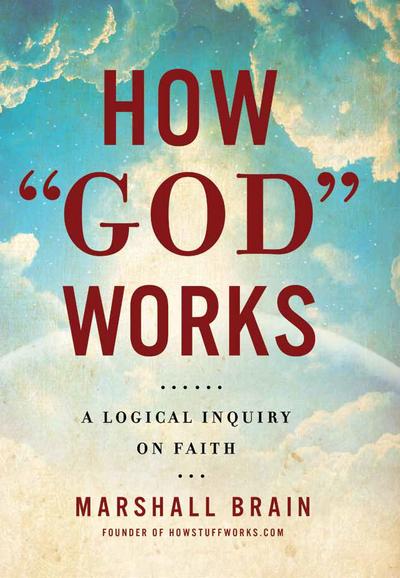 You may not know this, but Brain is the same guy who created the website Why Won’t God Heal Amputees? And in the excerpt below, Brain talks about why God isn’t in the limb-regenerating business and what we should take away from that:

Millions of people pray to God every day to cure their diseases, solve their financial problems, help them win in Las Vegas, and so on. Christians behave in this way for many reasons: Because so many other people talk about answered prayers; because prayer is a big part of the culture; because of the many statements in the Gospels claiming that God will, in fact, do something as a result of prayer.

Imagine a Christian named Ashley who would like to be intellectually honest with herself. Her desire is to understand what’s really happening with prayer — to understand whether God is actually answering her prayers, or whether her “answered prayers” are in reality simple coincidences. For Ashley, there is an easy way to discover the truth: She can pray in a situation where there is no chance for coincidence to occur. Since coincidence has been eliminated, the only way for the prayer to be answered is for God to actually answer it.

Let us imagine that we, as critical thinkers, wish to formulate an extremely simple and extremely benevolent experiment to test the efficacy of prayer for Ashley. We take Christian veterans who are amputees and we start a program to actively and intensely pray for them. Christians gather together to ask God to spontaneously restore the lost limbs of veterans. We do not pray for prosthetics, or for surgeons to graft on donor limbs, or for medical science to develop a revolutionary new stem cell therapy or gene manipulation. We ask God to spontaneously replace amputated limbs today using only the power of prayer.

What happens if Jesus, who is supposed to be God incarnate, who is supposed to be perfect, omniscient, and incapable of lying, says, “I will do whatever you ask in my name” in a book that the majority of adults in America claim to be literally true? In that case, a critical thinker reasonably expects Jesus to do what he says he will do. We expect Jesus to regenerate amputated limbs in the same way that Christians claim Jesus is eliminating cancerous tumors. There really is nothing else to expect in this situation unless one or more of God’s attributes are false.

Yet we know, with certainty, that prayers for the restoration of amputated limbs will never work. Amputated limbs are never restored through prayer. Every thoughtful, intellectually honest person knows this.

It doesn’t matter how many people pray, how sincere they are, how devout they are, how much money they give to the church, or whether a priest is involved. Nothing ever happens when we pray to restore amputated limbs.

So why won’t God help amputees by restoring their lost limbs? Does God hate amputees? Is God discriminating against amputees? Is there something about amputees that locks them out of God’s prayer answering circle?

You can perform experiments yourself, in your own home today, to prove that prayer doesn’t work as described in the Bible. Critical thinkers use the evidence to understand the truth about how the world works.

So why do billions of people on Earth today believe that prayer works? Why is religious inspirational literature filled with thousands of examples of “answered prayers?” What’s happening is simple: Believers, because they lack or ignore critical thinking skills, do not look at evidence correctly. Or they completely ignore evidence. For example, believers fail to take coincidence into account when evaluating prayer’s efficacy, using confirmation bias to make note of the prayers that “work” while ignoring all of the prayers that do not.

To see the reality of prayer, simply read what the Bible says and listen to what Christians say about prayer. Then pray for anything that cannot happen by coincidence. Pray for amputees to see their lost limbs spontaneously regenerated. Pray for an immediate, worldwide end to all cancers and other illnesses. Pray to fly like Superman. If there is no possibility for coincidence to influence the outcome, the number of answered prayers will always be zero.

How “God” Works is available in bookstores and online beginning today. And don’t forget to listen to our interview with Marshall on the most recent episode of our podcast!

Reprinted with permission from How “God” Works published in 2015 by Sterling Ethos, an imprint of Sterling Publishing. Text © 2014 BYG Publishing, Inc.

January 6, 2015
Troy Chancellor Jack Hawkins Has No Clue How to Apologize for the Inappropriate Religious Video He Sent Students
Next Post