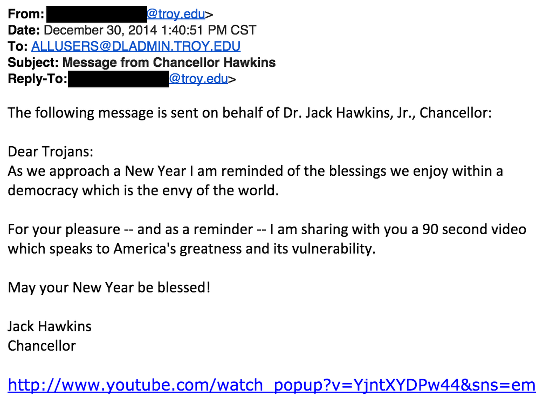 That video was all about how religion was vital for democracy because it persuaded people to follow the law… since they were ultimately accountable to God. It’s a completely warped vision of how democracy works — and sends the message that Godless people are inherently immoral.

American Atheists even demanded an apology from Hawkins, sending him a letter addressing the faults of the video.

And it looks like he should enroll for some remedial reading comprehension classes at his university since his response addresses absolutely none of the criticisms.

In a statement sent to Inside Higher Ed, Hawkins wrote:

The purpose of this email was to spur introspection and encourage thoughtful discussion as we transition from the challenges of 2014 to the opportunities ahead in 2015. Troy University is an international university that contributes regularly to the global marketplace of ideas. This message and video were shared to provide the university community with information and insights for healthy consideration and debate about our country’s democracy, the role it plays in the world and the challenges America faces going forward.

In other words, no apology. Not even close.

I have no idea what sort of thoughtful discussions he expects to hear from a video that sends the message: “Fuck atheists.”

It was irresponsible to begin with and it’s a mark of piss-poor leadership that he can’t even bring himself to acknowledge why anyone might be upset about it.

I hope students at the university find a way to (respectfully) express their frustrations with their leader. This would never have been tolerated if he had slammed any other group of students besides atheists.