The Religious Makeup of the 114th Congress: Only One Member is a “None” and Even She Won’t Call Herself an Atheist January 5, 2015 Hemant Mehta

The Religious Makeup of the 114th Congress: Only One Member is a “None” and Even She Won’t Call Herself an Atheist

It’s sad how little has changed since then regarding atheists in Congress.

What are the religious affiliations of members of the 114th Congress?

But there’s a striking disparity in one category… 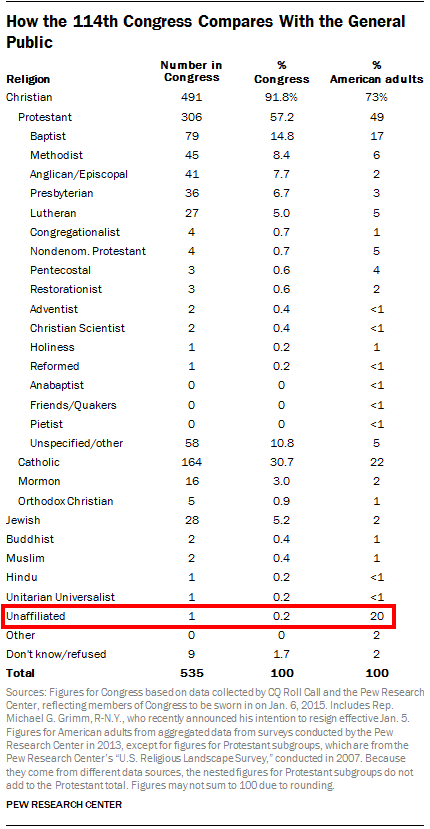 The “Unaffiliated.” We’re 20% of the country and 0.2% of Congress with a single representative.

As was the case in the 113th Congress, the biggest difference between Congress and the general public is in the share of those who say they are religiously unaffiliated. This group makes up 20% of the general public but just 0.2% of Congress. The only member of Congress who describes herself as religiously unaffiliated is Rep. Kyrsten Sinema, D-Ariz.

As noted above, Rep. Sinema of Arizona is the only member of Congress who identifies publicly as religiously unaffiliated. Rep. Ami Bera, D-Calif., is the only Unitarian Universalist, and Rep. Tulsi Gabbard, D-Hawaii, is the only Hindu. Both Muslim members of Congress — Rep. Keith Ellison, D-Minn., and Rep. Andre Carson, D-Ind. — were re-elected in 2014. Nine members (all Democrats) refused to specify their religious affiliation, one fewer than in the 113th Congress.

If Sinema’s the only “None,” she’s certainly not very forthcoming about it. Her campaign made it clear to the media years ago that she is certainly no atheist:

While Sinema’s campaign was initially unavailable for comment after Tuesday’s election, spokesman Justin Unga said Friday that Sinema does not consider herself a nonbeliever, adding that she prefers a “secular approach.”

“Kyrsten believes the terms non-theist, atheist or nonbeliever are not befitting of her life’s work or personal character,” Unga said in email. “She does not identify as any of the above.”

So she may be Unaffiliated, but she’s not non-religious — not openly, anyway. (Note: When openly non-theistic Rep. Pete Stark was in Congress, he was listed as a Unitarian.) It does us no good. As far as I’m concerned, we have no representative. Allies? Yes, a handful. But nothing more than that.

Even if Sinema is a “None,” having only one openly non-religious member of Congress is just awful. We need better representation, which starts by having more open, electable atheists running for public office. 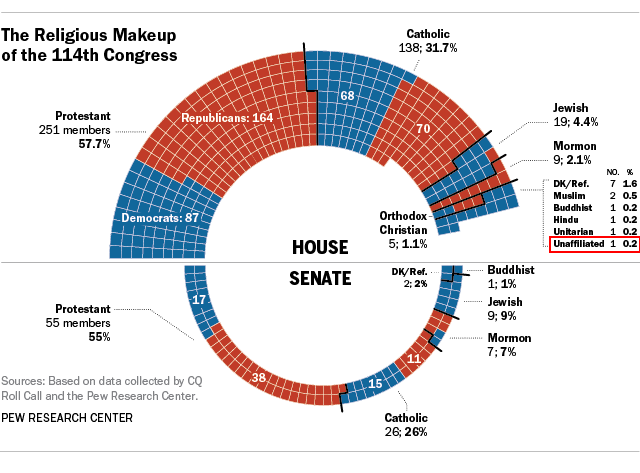 There’s very little doubt in my mind that there are more Unaffiliated, non-religious Americans in Congress, but they dare not say so because it would be political suicide where they come from. In the past several years, that pressure to stay in the closet has been strong… but not everywhere in the country. Maybe we’ll soon see more candidates at least not declaring a religious affiliation (even if they don’t say “Unaffiliated”).

In case you’re curious, here’s are the 9 members of Congress who are “Unspecified” or who didn’t answer the question:

Rep. John F. Tierney (D-MA) used to be on that list, but he was defeated in his primary last year by fellow Democrat (and current House member) Seth Moulton, who happens to be a Christian.