Who would hate a comedy that spoofs religious hatred?

Some religious people do… and they want it banned.

PK is the story of an alien (played by Aamir Khan) who lands on earth as a blank slate and is uninfected with religious prejudices and material urges. He realizes that the human species is no different from him and it’s only religious beliefs and nationality that divide and polarize people against each other.

The story revolves around a Hindu girl, Jaggu (Anushka Sharma), who falls in love with Sarfaraz (Shushant Rajput), a Pakistani Muslim boy. But their relationship ruptures due to some misunderstanding and a Hindu saint takes advantage of the situation to create mistrust in her mind against Muslim men. … The story actually challenges myths and prejudices being spread against Muslims in India by supporters of the ruling Hindu nationalist Bhartiya Janata Party. 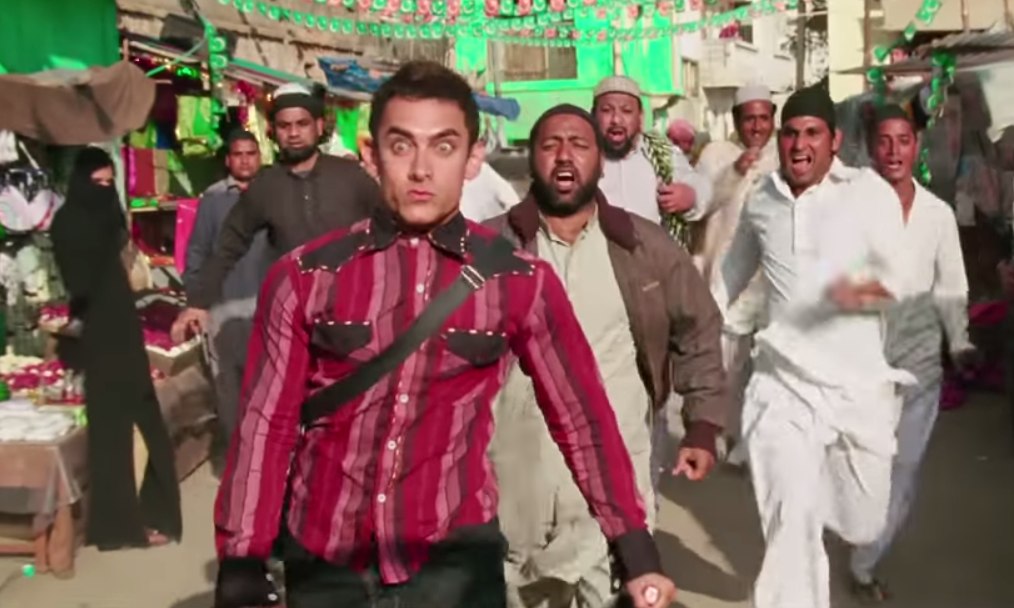 The story pulls no punches while questioning the blind faith and superstition that prevails in all religious communities. … The makers of PK have raised basic questions, such as why one has to waste time and money on rituals and ceremonies when everyone knows what material conditions cause miseries in life, or why people blindly follow the saints and ascetics who actually con the public with magic tricks.

BJP fans, true to form, have been agitating against the film for weeks now, unsuccessfully calling for a boycott.

In the past, the BJP has used more violent means to protest against books, films, and TV serials depicting such realities. Earlier, a similar kind of film, Oh My God!, was banned by the Punjab government in which the BJP is a partner.

According to the Guardian,

Nationwide protests are being organized outside cinemas, even vandalizing a few and forcing some to cancel screenings. Complaints have also been filed with the police and in courts demanding a ban on the film and the arrest of its director and star.

You can get a further idea of how incensed some religionists are by reading the 6,000 YouTube comments on the trailer (many hyper-aggressive), though I wouldn’t recommend it.

Despite the anger, moviegoers in India and even Bollywood-lovers in America appear to be massively receptive to the movie’s message: that, at a minimum, religion ought to be taken with a few grains of salt. PK is already the biggest box office hit in India’s history. Plus,

At the end of its second week, [it] has become the highest-grossing Bollywood movie ever in North America with 9.15 million dollars.

I especially love that the people who wanted the movie banned or censored instead catapulted it into the national conversation, ensuring higher ticket sales — proof that the Streisand effect is alive and well abroad and at home.

January 5, 2015
The Religious Makeup of the 114th Congress: Only One Member is a "None" and Even She Won't Call Herself an Atheist
Next Post