During his (now annual) winter trip to Hawaii, Bill Maher met up with Larry Charles, the director of Religulous, and hinted on Twitter that a sequel could be in the works: 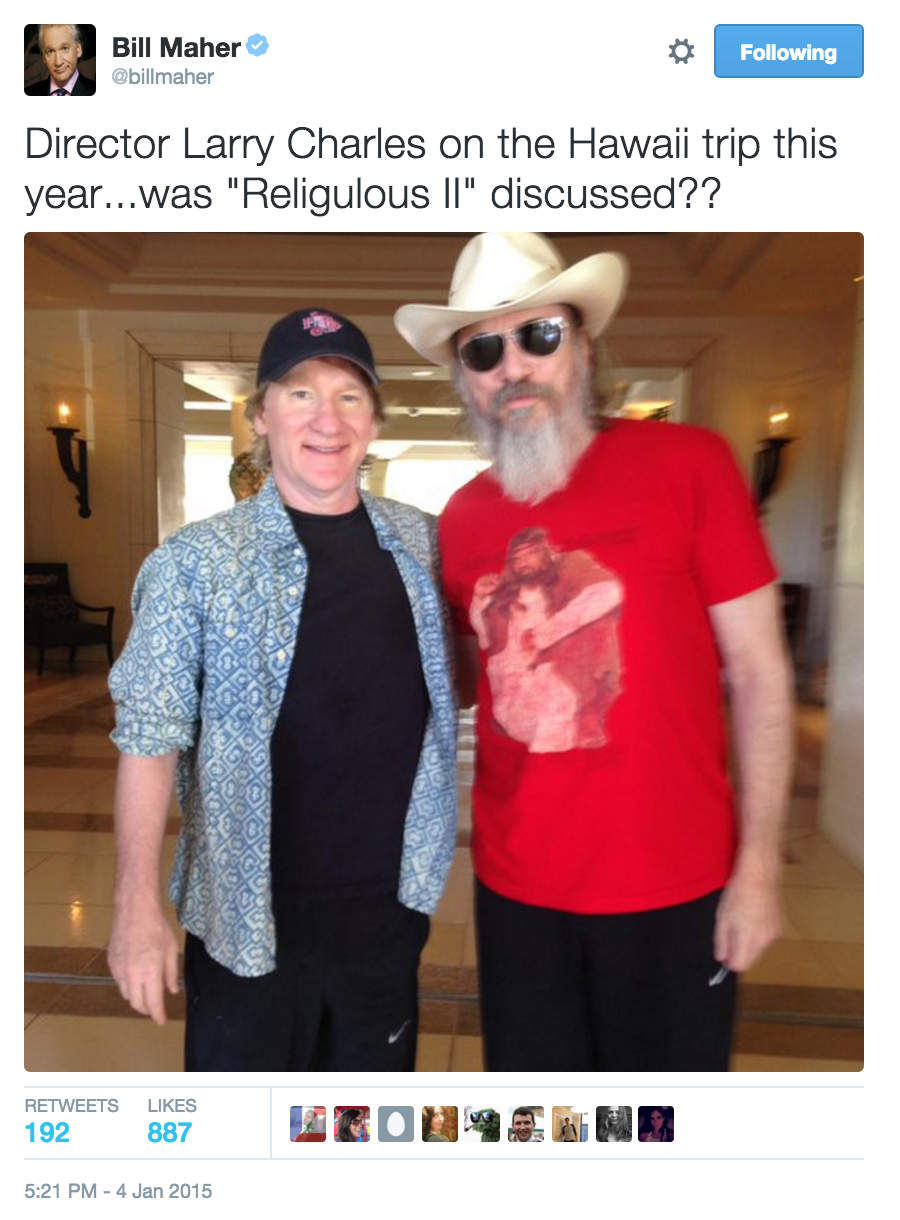 It’s possible he was only joking, but the idea isn’t that far-fetched. (Plus, Religulous: Resurrected would be a pretty damn catchy title.)

If anything, Maher has only cemented his status as one of the most recognizable atheists on television since then, especially after his blunt criticisms of Islam on Real Time last season.

A movie that focused on the pernicious effects of religion in the world today — rather than just how silly it all is — would certainly create controversy, generate its own publicity, and (most importantly) draw an audience.

Of course, it would likely draw a lot of criticism, too. His first movie was even panned by a lot of atheists because they felt he took too many cheap shots in the film. Though those critics who claimed the jokes at Christianity’s expense were like shooting fish in a barrel often ignored the fact that Creationist thinking infects millions upon millions of Americans. (Including politicians, as Maher noted in the film.) It wasn’t like Maher found the fringiest of all Christians and held them up as representative of all believers everywhere. He found people whose beliefs are held by the masses, whether you want to admit it or not.

(He’s been having a similar battle with Islam on his show. His critics accuse him of equating the beliefs of a small group of radical Muslims with the much larger group of moderate ones, while his response has been that many of the extremist beliefs he criticizes are held by far more Muslims than people are willing to admit.)

Another common criticism was seen in reviews like this one by Sonny Bunch in the Washington Times:

It’s fair to say that I’m a member of “Religulous’” target audience, an agnostic who takes issue with most forms of religious extremism. Nevertheless, by mocking American Christians for more than an hour while treating radical Islamists with kid gloves for about 15 minutes, Mr. Maher seems to have his priorities all wrong.

I don’t see a problem with pointing out how religion impacts the U.S. specifically. (Though a second film could easily focus on Islam.)

The one criticism I’ve seen that I agree with is that the movie did far more to “excite the base” than it did to change minds. There’s nothing wrong with that, of course, and Maher’s whole schtick is to mock silly beliefs. But I hope he’s aware that simply ridiculing religion (again) will make a lot of people even more defensive about it instead of eager to change their minds. Maybe there’s no way for him, with his style of comedy, to avoid that, but I hope he keeps that in mind. Then again another movie in the same vein as the first could at least spur more serious discussions about religion in other venues.

January 5, 2015 The Other Half of Franklin Graham's Tweet About AirAsia Flight QZ8501
Browse Our Archives
What Are Your Thoughts?leave a comment