On Fox News Channel last night, former Gov. Mike Huckabee announced that he would be leaving the network in part so that he could focus on making a decision to run for President. 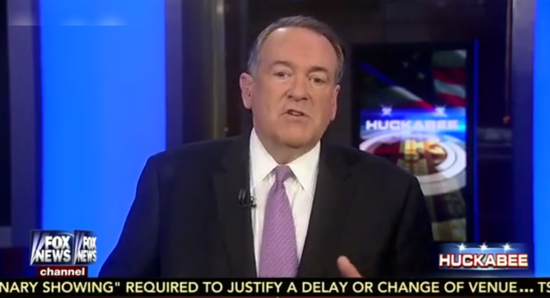 “There has been a great deal of speculation as to whether I would run for president,” Huckabee said. “If I were willing to absolutely rule that out, I could keep doing this show. But I can’t make such a declaration. I won’t make a decision about running until late in the spring of 2015, but the continued chatter has put Fox News into a position that is not fair to them nor is it possible for me to openly determine political and financial support to justify a race. The honorable thing to do at this point is to end my tenure here at Fox.”

In his 2008 campaign, Huckabee, a Southern Baptist minister, parlayed his connections among the strongly religious voters in Iowa’s start-off caucuses. He won seven other contests, mostly in the South, but ultimately lost the nomination to Arizona Sen. John McCain.

That just makes no sense at all. Huckabee doesn’t have a chance to win in 2016, so I’m not sure what exactly he’ll be doing over the next few months in gauging a possible candidacy.

The GOP may have had a resounding victory in the 2014 midterm elections, but they did it by avoiding culture war issues. When it comes to LGBT rights, for example, popular support for gay marriage has only gone up since Huckabee last ran, and there’s no sign of that trend reversing:

Huckabee is notoriously anti-gay marriage. He’s proud of his bigotry. Does he think people are going to magically be okay with that in a couple of years when it’s possible gay marriage could be legal throughout the country?

That’s not to say I’m rooting against him. I want him to run. I want him and Rick Santorum to win their primaries, make Jeb Bush look like a weak candidate, and drag the Republican Party even further into the abyss. People like Huckabee are great for the Christian base, but awful for just about everyone else.

If the next election is all about social issues, which Huckabee won’t be able to avoid, I’m optimistic about what the results would look like.

January 4, 2015
You Thought You Knew the Story of Samson and Delilah. You Were Wrong
Next Post