Maryland Priest With Known DUI History Was Promoted to Bishop; On Saturday, She Committed a Fatal Hit-and-Run January 1, 2015 Terry Firma

Maryland Priest With Known DUI History Was Promoted to Bishop; On Saturday, She Committed a Fatal Hit-and-Run

An omniscient, omnipotent God orchestrated it all, I guess.

Leaders in the Episcopal Diocese of Maryland who this spring made Heather Elizabeth Cook a bishop — the diocese’s first female bishop — knew the ugly details of her 2010 drunk-driving arrest but determined “that this one mistake should not bar her for consideration as a leader,” the diocese said in a statement Tuesday.

Now the diocese finds itself under fire after Cook’s acknowledgment that she was involved in a crash on Saturday that killed bicyclist Thomas Palermo, the father of two small children. Cook left the scene but returned later, Bishop Eugene Taylor Sutton said in a statement Monday.

In the September 2010 arrest, Cook, then a priest,

… was pulled over at 1:15 a.m. … and was too intoxicated to complete sobriety tests. She had vomit on her shirt, the report said, and one of her four tires was shredded down to the rims. Cook told the officer she was driving from Canada and had drunk alcohol and smoked marijuana while driving, according to the police report. 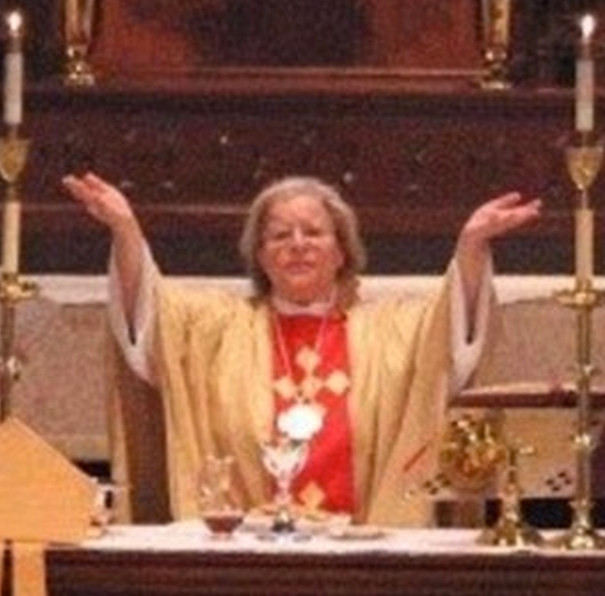 Cook later submitted to a blood-alcohol breath test and recorded a 0.27, far above the legal limit.

Cook left the scene after the 2:30 p.m. crash, despite having a heavily broken windshield. Sutton’s letter said Cook returned to the scene “after about 20 minutes to take responsibility for her actions.” However, cyclists on several Baltimore news and biking sites said that her car was chased by other cyclists and that she returned only because of that.

Five days later, investigators have still not announced whether alcohol was involved, even though Cook’s blood-alcohol level was presumably tested within hours after she killed Palermo. We’ll have to assume that the cops’ refusal to release basic details has nothing to do with the fact that she’s a bishop in a well-connected church.

In a recent sermon that was posted to YouTube, Cook talks a good game about responsibility, invoking people’s behavior in traffic:

“If we routinely drive 55 in a 30 mile-an-hour zone, we won’t be able to stop on a dime if driving conditions get dangerous or if an animal or, God forbid, a human being should step out in front of us. Things happen suddenly, and we’re either prepared in the moment or we’re not, and we face the consequences. We can’t go back. We can’t do it over.

In real life, there are no instant replays. I think this is something of a hard message to give to you today. My perception is that we live in the midst of a culture that doesn’t like to hold us accountable for consequences, that somehow everybody gets a free pass all the time. Well, we do in terms of God’s love and forgiveness, but we don’t in many of the things that happen, and it’s up to us to be responsible.”

Cook’s problems with alcohol are nothing new for her family. She is the daughter of the late Rev. Halsey Cook, a prominent Episcopalian, who told his parishioners in 1977 that he was

… “a sheep, and this place and you people have often shepherded me. I am an alcoholic.”

Palermo, a software engineer at Johns Hopkins, leaves a wife and two young children, aged 4 and 6.