Here’s a well-known recipe for disaster: Imbue a man with so-called spiritual powers, put him on a pedestal, and disregard what people say about him, even if he is rumored to be a serial child rapist.

The Washington Post sheds a good deal of light on the alleged crimes of Charles Chipps Sr. (below), an Oglala Sioux medicine man who long lived on the Pine Ridge Indian reservation in South Dakota, where he is thought to have raped at least six underage girls, including several of his own daughters and granddaughters. The victims were as young as five years old.

… inherited his spiritual position in the tribe and became a renowned medicine man on Pine Ridge and beyond, even releasing a CD of ceremonial songs. …

It was in a little blue house and a log cabin in [his] compound that Chipps abused girls and young women who came to him for spiritual guidance, according to the indictment against him and other court documents. He also allegedly sexually assaulted them on his nearby sacred ceremonial grounds, forcing them to disrobe and engage in sexual acts in the darkness of the sweat lodge. …

A girl from Colorado whose aunt brought her to meet Chipps for spiritual guidance committed suicide after revealing the abuse she allegedly suffered. 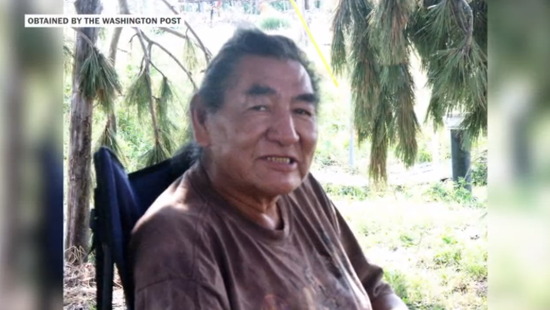 According to reporter Sari Horwitz,

Many studies tie sexual abuse to the intergenerational trauma that began in the secular and church-run boarding schools that Indian children were required to attend. Court documents and lawsuit settlements reveal how the boarding schools, especially in places like South Dakota, were centers of widespread sexual, emotional and physical abuse. …

His sister-in-law Lena recounts how Chipps would take children into the sweat lodge and allegedly have sex with two or three victims at the same time.

“And he would tell them it’s the spirits.”

His lawyer claims he can’t stand trial because of infirmity and, wouldn’t you know it, chronic forgetfulness:

“He would not be able to take the stand because he has no recollection of events.”

Chipps, if tried and convicted, faces life behind bars.

(Screenshot via Washington Post video; thanks to Joe for the tip)

December 30, 2014
There's No Reason to Thank God After the AirAsia Flight Disappearance
Next Post