Creationist Finds a New Way to Proselytize at Taco Bell by Getting the Workers to Do It for Him December 29, 2014 Hemant Mehta

Whenever I go to a restaurant or coffee shop and they ask for my name, I’ve gotten used to saying “Bob.” It’s a reflex at this point. Instead of going through the motions of pronouncing my real name and spelling it out for someone who doesn’t really care and just needs to use it once, I prefer making things easier for everyone.

When a Taco Bell worker asks Creationist Eric Hovind for his name — an interaction that ought to be quick and simple for a guy named “Eric” — he decides to make their jobs harder (certainly more uncomfortable) by telling them his name is “Jesus Christ is Lord.”

Then, as he says, “all you gotta do is sit back and let them witness for you.” 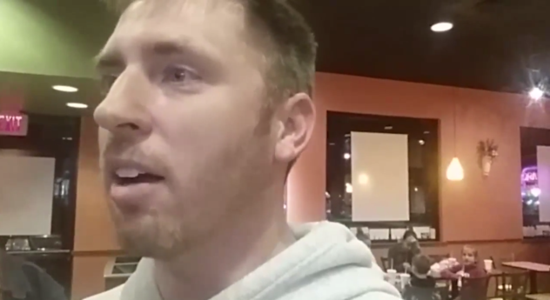 It’s not clever; it’s just a dick move. Hovind never thinks about how he’d feel if he were behind the counter and someone asked him to say “Allah is Lord” or “God doesn’t exist.” Because the methods don’t matter to him as long as the end result is that his God gets a shout-out. He also doesn’t care about the other people eating there. At best, this is just a pointless annoyance. At worst, he’s putting workers in a very uncomfortable position.

By the way, I feel the same way about atheists who rearrange books in a library or bookstore so that the Bible is moved to the fiction section. All that does is make it harder for the workers who will eventually have to put the books back and the customers who won’t be able to find what they need.

Also, if your religious beliefs can change because someone yelled “Jesus Christ is Lord” at a Taco Bell, then you know what? The Christians can have you. It’s clear that their bar is comically low.

December 29, 2014
This Song About Sexual Purity Sends the Wrong Message to Young Women
Next Post