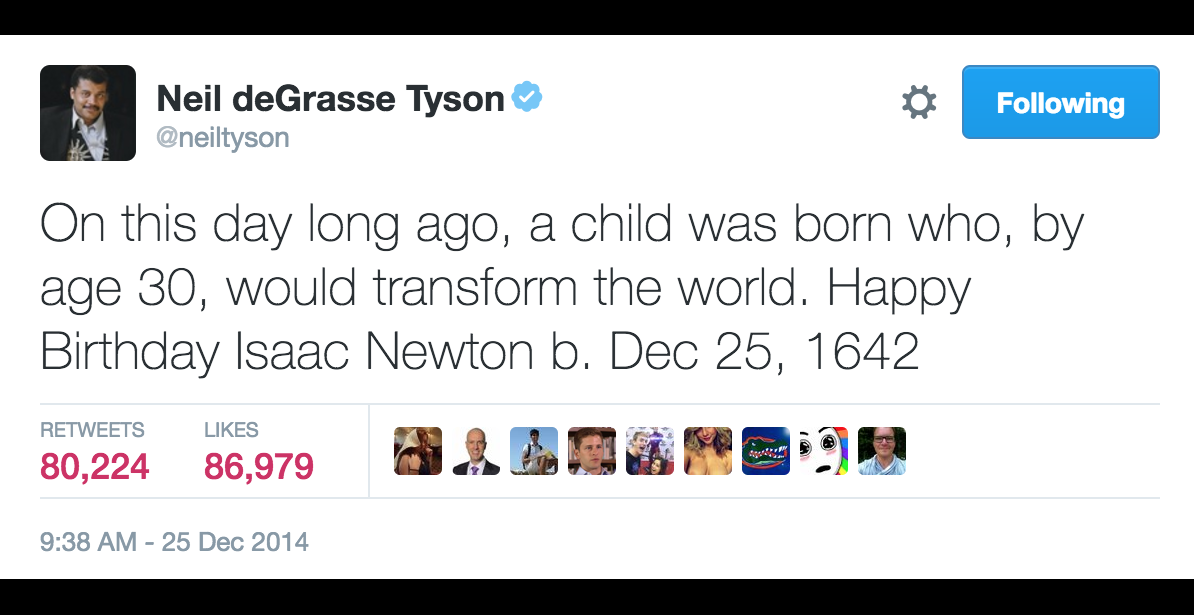 It quickly became his most retweeted message ever, and many accused him of “riling up Christians.”

That’s completely absurd. First, Tyson goes out of his way not to be offensive. He doesn’t even like to be called an atheist in part because he worries that any label like that would alienate many of the people he’s trying to reach. Second, the only way that statement is anti-Christian is if you wrongly assume everyone should be celebrating the birth of Christ. As I’ve said many times before, Christians don’t own Christmas and Jesus wasn’t the only person (supposedly) born on December 25.

Celebrating Newton’s birthday makes sense. Using a setup that suggests you’re talking about Jesus is clever. Getting an online lashing for that tweet is ridiculous.

Tyson wrote this tweet last night in response to the whole kerfuffle:

He also explained on Facebook that he has no idea how his Christmas tweet generated such a response:

My sense in this case is that the high rate of re-tweeting, is not to share my enthusiasm of this fact, but is driven by accusations that the tweet is somehow anti-Christian. If a person actually wanted to express anti-Christian sentiment, my guess is that alerting people of Isaac Newton’s birthday would appear nowhere on the list.

Some even called for me to delete the tweet…

He plans to do no such thing.

Happy Holidays to you all. And a humble thanks for your continued interest in what I have to say about life, the universe, and everything. But most importantly, enjoy a Happy New Year. A few days after, I’ll be tweeting about Earth’s perihelion. Just a head’s up in case people want to avert their eyes over that one.

As anyone who’s been active on Twitter knows, there are plenty of thin-skinned people on there, looking for any excuse to take offense tweets that are otherwise innocuous (or funny in a way you don’t appreciate). Hopefully, they won’t deter Tyson from his educational and sometimes-pointed witticisms.

December 27, 2014
NBC Wonders Why Physicians Don't Rely More on the "Power of Prayer"
Next Post