In a move that would be right at home in the GOP, the Crow Nation tribe last year passed a resolution “proclaiming Jesus Christ as Lord”:

The Crow Constitution protects “full exercise of religion,” but, unlike the U.S. Constitution, does not contain a clause that prevents the government from the establishment of religion.

“As a sovereign nation, we’re not bound by separation of church and state,” said [legislator Conrad J.] Stewart, who penned the resolution. “People are afraid to say, ‘Jesus,’ in the political arena…”

And now, they’ve gone a step further by putting up a 33-foot sign saying “Jesus Christ is Lord on the Crow Nation.”

Because Jesus won’t know it unless He can see the sign from miles away.

Stewart said that, while the tribe’s public profession of faith could be seen as controversial, it isn’t intended to make non-Christians, including those who observe traditional Native American spiritual practices, uncomfortable.

“Some people may not believe in the name of Jesus,” he said. “That’s fine, we don’t put that down.”

“We’re taught by elders to respect all religions,” Stewart said.

And they’re apparently also taught to make sure one religion is declared supreme to all others.

It also seems weird that a tribe that prides itself on its independence would give homage to a religion that the proclamation even says outright was brought to them by “Christian missionaries… during the 19th Century.” If anything, you’d think they’d want to stick to their traditional forms of spirituality and not embrace a culture that’s already taken so much from them.

(image via Wikipedia. Thanks to Ross for the link) 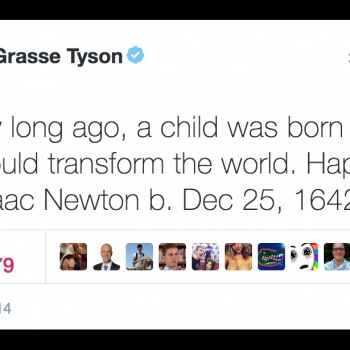 December 27, 2014
Neil deGrasse Tyson Gets Accused of "Riling Up Christians" with Christmas Day Tweet About Isaac Newton
Next Post